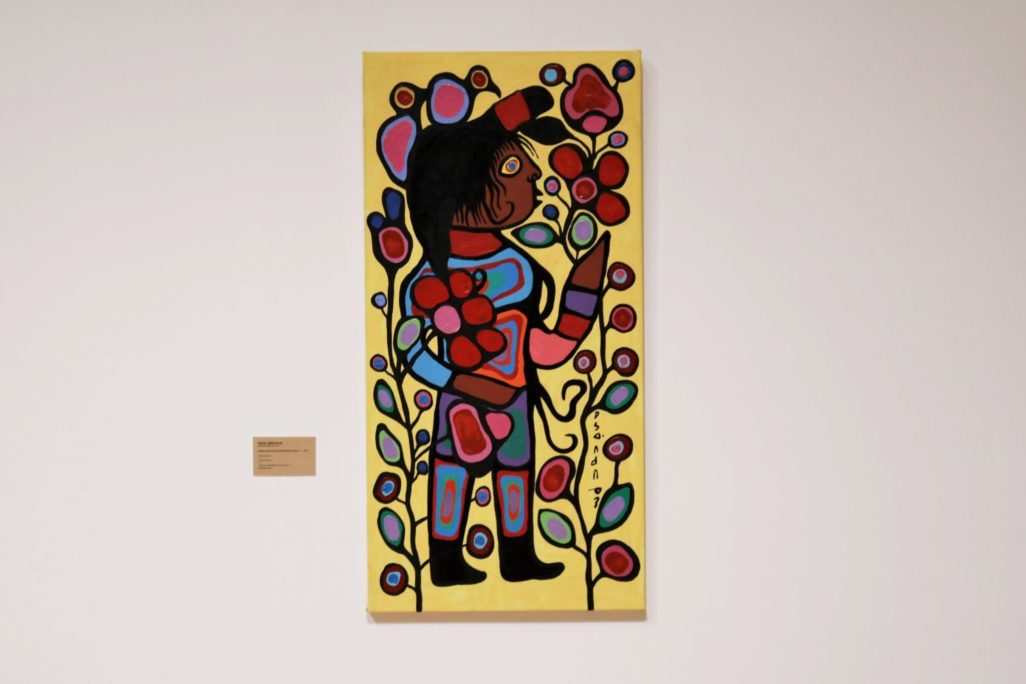 Norval Morrisseau, Ojibwa Grandchild with Woodland Flower I, circa 1987, oil on canvas.

Join us in-person or online for another Studio Sunday activity inspired by the Anishinaabe artist Norval Morrisseau’s Ojibwa Grandchild with Woodland Flower I. This week, create an abstract artwork to represent one of your most important relationships with another person.

Register to book your spot as there is a 12 person hourly capacity!

In this artwork, a small child stands against a bright yellow background, with their left hand raised. Inside the child’s body you can see bright sections of blue, green, purple, orange, red, and pink. There is a tall black stem with vibrant flowers and leaves growing on each side of the child. Two small, round birds with pink and purple bodies seem to perch on the child’s head. Everything in this image is outlined in black.

This artwork is an example of the unique painting style that Morrisseau created. He was a self-taught artist who learned through practice, and through studying the artwork of his Anishinaabe ancestors. Morrisseau is credited with starting the Woodland School of Art, a style of art inspired by Anishinaabe pictographs (paintings on stone) and paintings of stories on birchbark scrolls. Morrisseau didn’t just copy these historical artworks- he created his own abstract style based on them. This style also responded to the popularity of abstract artwork in the 1960’s and 1970’s. Woodland artwork is often defined by bold outlines and vibrant solid colours. It sometimes has lines that show connections and communication between its subjects. Often in the Woodland style, you can see inside the segmented bodies of animals and people.

Curator Felicia Gay stated of Morrisseau that “His work reflected a worldview that spoke through stories and relationality.” (Miskwaabik Animiiki Power Lines: The Work of Norval Morrisseau – MacKenzie Art Gallery | MacKenzie Art Gallery ) A worldview is how a person or group of people understands the world. It is shaped by their experiences, their culture, and their environment. Relationships, or how people, places and things are connected, were very important to Morrisseau’s Anishinaabe culture. In fact, almost all of Norval Morrisseau’s artworks depict relationships.

Norval Morrisseau is an Anishinaabe artist whose work has helped shape Canadian art history. He is often considered the “Mishomis” or “Grandfather” of Indigenous art in Canada because of his major contributions to the Indigenous art community.

Besides helping to found the Woodland style of artwork, Norval Morrisseau was also a part of a group called the Professional Native Indian Artists Incorporated (PNIAI). The other members of the group were Jackson Beardy, Eddy Cobiness, Alex Janvier, Daphne Odjig, Carl Ray and Joseph Sanchez. These artists worked together to support each other’s art careers. Often, Indigenous artists’ works were treated more like artefacts that belonged in museums rather than displayed in art galleries. The PNIAI fought to have Indigenous artists recognized by the fine art scene in Canada and across the world.

Norval Morrisseau’s career and the formation of the PNIAI were happening at a time of great change for Indigenous peoples. In 1951, the Indian Act had gone through some major changes. The ban on traditional Indigenous ceremonies was lifted, and the pass system that forced Indigenous people to request permission whenever leaving reserve land was removed, although this practice continued in some places until as late as the 1960s. Indigenous people were given the right to vote in Canadian elections in 1960. Many (but not all) Residential schools were closed in the sixties and seventies. This is not to say that all discrimination of Indigenous peoples stopped 1960’s. However, this was a time of major social change when many Indigenous people were working together to support each other’s rights. Many people were reclaiming their Indigenous identities. Many Indigenous organizations were created in the sixties and seventies. At this time, artists like Morrisseau were paving the way for future Indigenous artists to be able to express their cultural identities and their personal art styles and still be accepted in the fine art world.

Inspired by the works of Norval Morrisseau, create an abstract artwork to represent one of your most important relationships with another person.

This activity is inspired by an activity featured in this resource from the Art Canada Institute: Norval-Morrisseau_Land-and-Indigenous-Worldviews_ACI-Teacher-Resource-Guide.pdf (aci-iac.ca)