Experience Exhibitions Melissa General: Kehyá:ra’s & ‘Cause I work so hard to make it every day

Melissa General: Kehyá:ra’s & ‘Cause I work so hard to make it every day 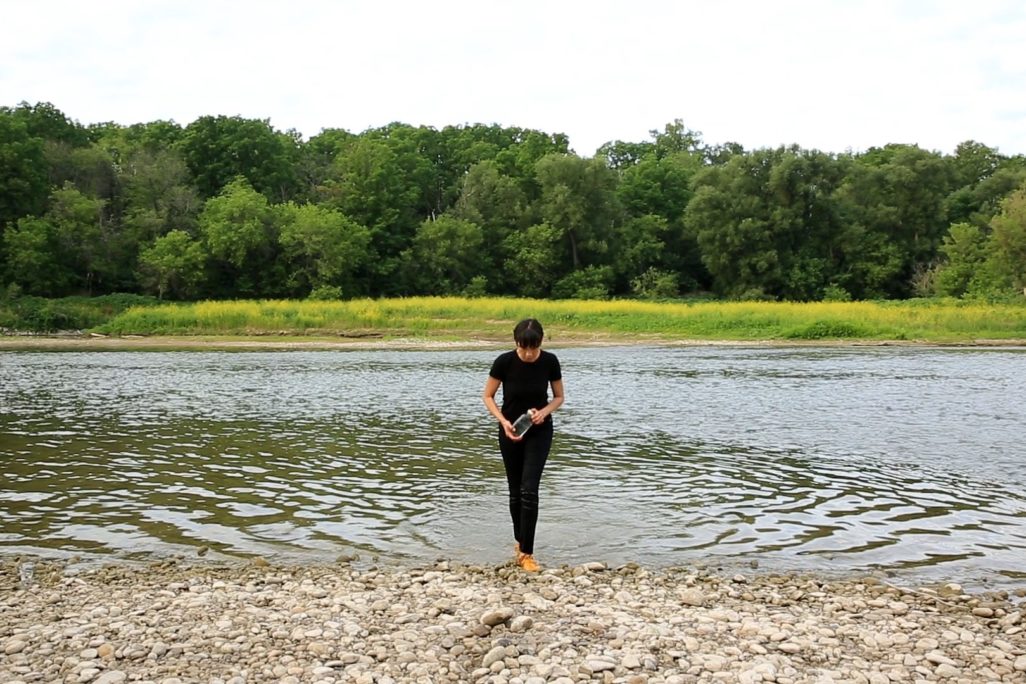 Production still of artist Melissa General's Kehyá:ra’s & 'Cause I work so hard to make it every day

The video work of Toronto-based Mohawk artist Melissa General deftly layers sound and image to create complex portraits of land, water, and culture, that are intimately connected to her home territory, the Six Nations of the Grand River in southern Ontario. For the two single-channel videos in this exhibition, General creates resonant soundscapes that add layers of meaning and memory to long tracking shots of her movement in the land.

Kehyá:ra’s (2016) shows General repeatedly walking into the Grand River—a river that plays an important role in General’s personal and cultural history, including it being used as a landmark defining the territory promised to the Haudenosaunee in the Haldimand Proclamation. There she collects water using her mother’s Mason jars. Accompanied by underwater recordings of the artist soaking in a medicine bath, General’s repeated journeys into the river underline the importance of water as traditional container of memory, healing, and spiritual connectedness.

In ‘Cause I work so hard to make it every day (2018), General continues her exploration of memory through a soundtrack based on an old cassette tape recording of her playing with her cousins and sister as a child. Returning to the territory of the recording, General paces through the verdant Carolinian forest while the viewer hears sounds of a 1980s Emulator synthesizer and the gleeful voices of children laughing, teasing, and singing lines from the Pointer Sisters’ hit “Neutron Dance.” In both videos, by slowing down our attention through allusive sound and deliberate movement in the land, General attunes us to her search for an embodied understanding of her relationship to territory, culture, history and the present. Her actions are carried out with intuitive but deliberate intent to create a space for revealing the intersection/interconnection between the land we walk and the lives we live.

Melissa General is a Mohawk artist from Six Nations of the Grand River Territory. She is a graduate of the Ontario College of Art and Design and received a Masters of Fine Arts degree from York University. She is a multidisciplinary artist working in photography, audio, video and installation. Her practice is focused on her home territory of Six Nations and the concepts of memory, language and land. Her artwork has been exhibited at the Art Gallery of Southwestern Manitoba, Lamont Gallery, Plug In Institute of Contemporary Art, Harbourfront Centre, Stride Gallery, Gallery 101, Gallery 44 Centre for Contemporary Photography and has been included in the 2016 Contemporary Native Art Biennial in Montréal. She is a Hnatyshyn Foundation REVEAL – Indigenous Art Award laureate and was named as the 2018 Ontario Arts Council Indigenous Arts Award Emerging Artist Laureate.