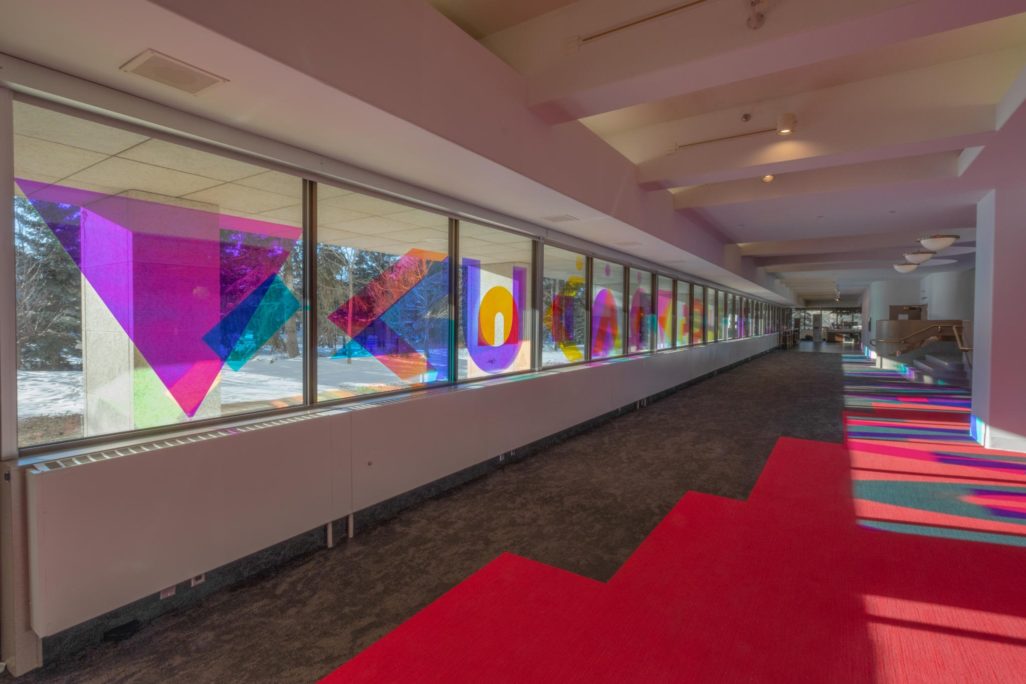 ᐁᐸᐢᐹᐱᐟ ᐚᓰᓇᒫᓂᕁ ᐚᐸᐦᑕᑦ ᐁᓈᓈᐦᑌᔨᐠ consists of a phrase written in Plains Cree syllabics produced on iridescent film and installed on both the interior and exterior of the ground-level windows of the MacKenzie Art Gallery. The phrase has been translated into English as “Looking out her window she watches a moving mirage of dazzling light.”

Nēhiyaw (Plains Cree) artist Joi T. Arcand was invited to make this work in response to the relationship between the MacKenzie Art Gallery and the land on which it is situated. The resulting work refers to Arcand’s personal experience of long winters spent at her home on the maskēko-sākahikanihk reserve as an oskinikiskwēw (young girl), gazing out the window and watching ē-nānāhtēk (a dazzling mirage of light).

For Arcand, the light represents the power of cahkipēhikana (syllabics) which have guided her in her language journey from childhood into adulthood. Arcand provides a nostalgic look at adolescence as well as a forward-looking articulation of the power of imagination, longing, and presence on ancestral lands.

The “mirage of light” also references the origin story of syllabics. In the story of Calling Badger, shared by Darryl Chamekese, it is said ē-kihkāsawiyēk kīkway kīsikōh (a bright light in the sky) accompanied the gift of syllabics, which were given to help ensure the survival of Nēhiyawēwin (the Plains Cree language). Chamekese’s story speaks to the gifts of creativity, culture, and communication that have been bestowed upon us that can both honour our histories and move us into the future.

By mirroring her phrase, Arcand addresses our relationship between interior and exterior, between individual and our wider relations—to that source of inspiration from outside of us that drives us to create. It also speaks to the two dominant perspectives of relating to an institution like an art gallery: looking from the outside in or from the inside out—to the potential for the institution to act as a source of inspiration and the need for the gallery to look outwards toward the beauty and ways of knowing that can’t be contained within its walls.

Arcand’s work shows how customary knowledge can be a source for new ideas. It points to new paths forward waiting to be gifted to future generations—to the dazzling mirages of light that will inspire the next evolution in how we communicate, relate, and thrive in our emerging cultural future, while honouring and building upon the lessons and knowledge of our ancestors and this land.

The phrase used in this work was created by Joi T. Arcand with Darryl Chamakese and was informed by teachings from Elders Jo-Ann and Jerry Saddleback, and consultation from Solomon Ratt.

Joi T. Arcand is a multidisciplinary artist from Muskeg Lake Cree Nation who currently resides in Ottawa, Ontario. Arcand’s work explores Indigenous identity, personal narrative, and the complex relationships, ambitions, and struggles involved in language revitalization efforts (particularly in Nēhiyawēwin-Plains Cree). Arcand is known for her insertion of Cree syllabics into public spaces, utilizing highly specific narratives and references that foreground these spaces within local knowledges and experience, without a constant need for translation from or to colonial languages.

Arcand was a 2018 finalist for the Sobey Art Award, co-founder of the Red Shift Gallery (a contemporary Indigenous art gallery in Saskatoon), and founder and editor of the Indigenous art magazine kimiwan. She has been widely exhibited across Canada, including in Àbadakone at the National Gallery of Canada (Ottawa, ON); INSURGENCE/RESURGENCE at the Winnipeg Art Gallery; McMaster Museum of Art (Hamilton, ON); The Center for Craft, Creativity and Design (Asheville, North Carolina); Wood Land School at SBC Gallery of Contemporary Art (Montreal); Ottawa Art Gallery; PAVED Arts (Saskatoon); and grunt gallery (Vancouver). Arcand has also been widely celebrated for her independent fashion brand Mad Aunty. 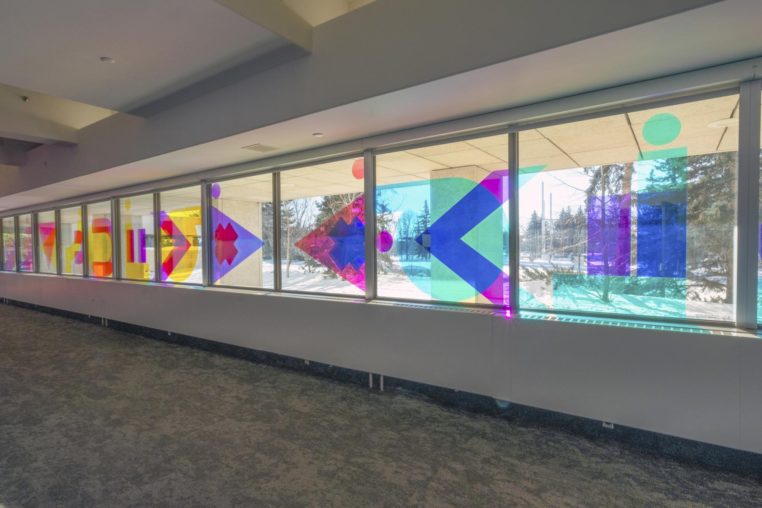 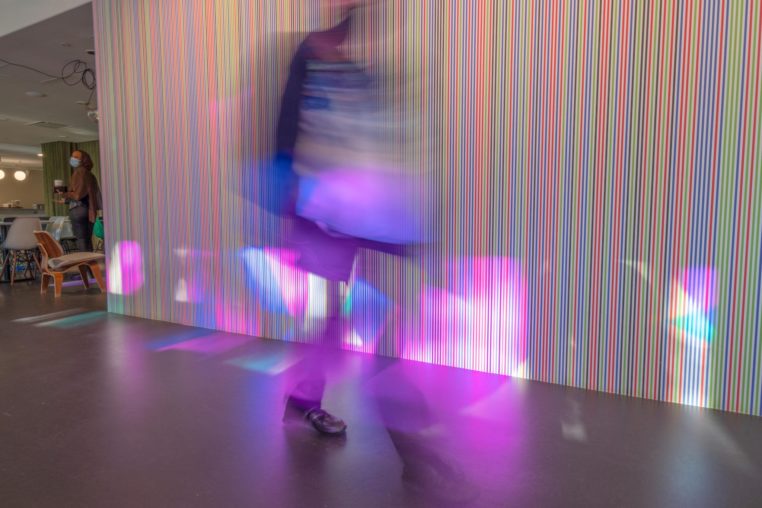 The story of Calling Badger

Long ago there was a Cree man named Calling Badger. He had special gifts. One night as he was walking with two men, they saw a bright light in the heavens. They fell to the ground, and as they did, they heard Calling Badger’s name. Not long after, Calling Badger got sick and eventually left this world.

He went to this beautiful place and saw a huge tipi, and inside he met an old man. The old man was dressed very well, and his hair was long. He was told prophecies and how things would be in the future. “Things will be difficult in the future; your children will not speak Cree and they will use another language,” said the old man.

All of a sudden four men came in. “We are the four main spirits of your language,” they told him. “We are here to help you save your language in the future,” they said. It was there that Calling Badger was taught how to write sacred symbols. The Cree started using the syllabics. Many people were able to write and read the symbols. Their use went far and wide. The people started writing to one another. Other indigenous people started using the sacred symbols as well.

Today, what the old man told Calling Badger has come true. In the residential schools, the young Cree were not allowed to speak their language. Today, they speak English rather than their own language. Some say that the Cree language is being lost, but one Elder says, “Why would the Creator take from us our language? There will be a time when the children will start speaking Cree again, but we all must work to lift our language up. This includes the Elders, leaders, parents, students and artists.’’