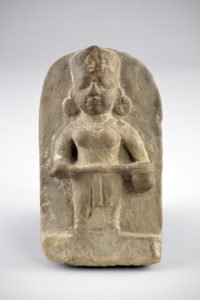 The MacKenzie Art Gallery, in partnership with the University of Regina, participated in its first-ever repatriation ceremony this week, as the Annapurna statue – part of the University of Regina collection housed in the MacKenzie’s vault – found its way back home. We are so grateful for the work Divya Mehra did, for her research, and the creation of There is nothing you can possess which I cannot take away (Not Vishnu: New ways of Darsána). Mehra’s work represents a new aesthetic and ethical dimension of institutional critique that will have a lasting impact on our Gallery and has made a meaningful contribution to this internation relationship.

A statue from the University of Regina’s collection at the MacKenzie Art Gallery began its journey home this morning with a virtual repatriation ceremony. The University of Regina’s Dr. Thomas Chase, Interim President and Vice-Chancellor, met with Mr. Ajay Bisaria, High Commissioner of India, over Zoom to officially repatriate the Annapoorna statue. Representatives from the MacKenzie Art Gallery, Global Affairs Canada, and Canada Border Services Agency also attended the ceremony.

The Annapoorna statue is part of the University of Regina’s collection stewarded by the MacKenzie Art Gallery through a longstanding partnership dating back to the early 1950s. Artist Divya Mehra brought attention to the fact that the statue was wrongfully taken over a century ago while going through the MacKenzie’s permanent collection and preparing for her exhibition From India to Canada and Back to India (There is nothing I can possess which you cannot take away) (August 7, 2020 – January 2, 2021). The statue was part of the original 1936 bequest by Norman MacKenzie, the gallery’s namesake. When Mehra researched the story behind the statue, she found that MacKenzie had noticed the statue while on a trip to India in 1913. A stranger had overheard MacKenzie’s desire to have the statue, and stole it for him from its original location – a shrine at stone steps on the riverbank of the Ganges at Varanasi, India.

Dr. Siddhartha V. Shah, Curator of Indian and South Asian Art at the Peabody Essex Museum, identified the statue as the Hindu goddess Annapoorna from her female physical characteristics. She holds a bowl of kheer (rice pudding) in one hand and a spoon in the other. These are items associated with Annapoorna, who is the goddess of food and the queen of the city of Varanasi. She is celebrated by her devotees as one who nourishes and strengthens the body through food, and the soul through enlightenment.

“The repatriation of the Annapoorna is part of a global, long-overdue conversation in which museums seek to address harmful and continuing imperial legacies built into, sometimes, the very foundations of their collections. As stewards of cultural heritage, our responsibility to act respectfully and ethically is fundamental, as is the willingness to look critically at our own institutional histories,” says Alex King, Curator/Preparator, University of Regina President’s Art Collection. “Today, we conduct due diligence on the provenance of incoming artwork but will take steps to review objects that have been in our care before such standards were commonplace.”

When the current administration at University and the MacKenzie Art Gallery were alerted to the documentation which revealed the statue as an object of culture theft, both institutions committed to take taking appropriate action.

“As a university we have a responsibility to right historical wrongs and help overcome the damaging legacy of colonialism wherever possible,” says Chase. “Repatriating this statue does not atone for the wrong that was done a century ago, but it is an appropriate and important act today. I am thankful to the MacKenzie Art Gallery, the Indian High Commission, and the Department of Canadian Heritage for their roles in making it possible.”

After reading about the discovery of the stolen statue, both the Indian High Commission in Ottawa and the Department of Canadian Heritage reached out and offered to assist with the repatriation.

“We are delighted that this unique statue of Annapoorna is on her way home. I am grateful to the University of Regina for their proactive engagement for the return of this cultural icon to India,” says Mr. Ajay Bisaria, High Commissioner of India. “The move to voluntarily repatriate such cultural treasures shows the maturity and depth of India-Canada relations.” 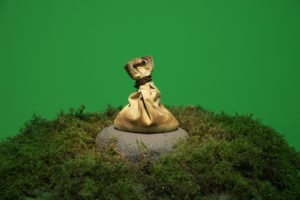 About The University of Regina:

The University of Regina—with campuses located on Treaty 4 and Treaty 6 territories, the ancestral lands of the Cree, Saulteaux, Dakota, Lakota and Nakoda nations and the homeland of the Métis—is a comprehensive, mid-sized university that traces its roots back to the creation of Regina College in 1911. Today, more than 16,600 students study within the University’s 10 faculties and three federated colleges (Campion College, First Nations University of Canada, and Luther College). The University of Regina has an established reputation for excellence and innovative programs that lead to undergraduate, master, and doctoral degrees.

Image Credit: Divya Mehra, There is nothing you can possess which I cannot take away (Not Vishnu: New ways of Darsána), 2020, coffee, sand, chamois leather, leather cord, metal grommets, 2.4 lbs. Photo by Sarah Fuller. Image courtesy the artist and Georgia Scherman Projects.