The MacKenzie Art Gallery Board of Trustees is pleased to announce the appointment of John G. Hampton as Executive Director & CEO. Hampton was appointed to the role in an interim capacity in August 2020 and will now assume a permanent position.

“We are excited for the future John envisioned and shared with us,” says artist Sherry Farrell Racette, search committee member. “We are particularly happy to see the MacKenzie follow its groundbreaking path in Indigenous curation—it was, as you know, the first public gallery to hire an Indigenous head curator—and now, we make history again by hiring the first Indigenous Executive Director and CEO of a public art gallery in Canada.”

“I am humbled and incredibly proud to take on this work with such an inspiring team and community. The MacKenzie is my hometown gallery, and it has played an integral role in shaping some of my earliest understandings of the role of art and culture in our society,” says Hampton. “I am honoured to be asked to continue the trailblazing work of forerunners like Bob Boyer, Lee-Ann Martin, Kate Davis, and so many more, as we work to live up to our role as caretakers of culture in this territory. The MacKenzie has an exciting future ahead of it, and I intend to bring a spirit of interdependence, innovation, trust, wonder, and respect as we celebrate the deep art history of this land in tandem with the most innovative practices and conversations happening in Canada and beyond.”

In Hampton’s two years at the MacKenzie, he implemented an artistic vision for the gallery’s programs centered around radical diversity, cultural health, writing art histories, and transformation. He helped build a new digital lab and initiative helmed by Cat Bluemke and Jonathan Carroll; developed a Mitacs partnership with the University of Regina focusing on decolonial curatorial practices, which included the appointment of Felicia Gay as Curatorial Fellow; oversaw the restructure of the Indigenous Advisory Circle and the appointment of the Gallery’s first Elder in Residence, Betty McKenna; chaired the newly formed Equity Task Force; and worked alongside the University of Regina and artist Divya Mehra on the first ever repatriation from the Norman MacKenzie collection of art.

“Since John joined our team at the Gallery in 2018, the MacKenzie has become an agent of change. John’s direction of the programming department has seen the implementation of new innovative digital programs and activities—work that has become even more vital over the past year, enabling us to continue to create transformative experiences of the world through art for our communities, even amidst the challenges of a pandemic,” says Nathan Schissel, President of the MacKenzie’s Board of Trustees, in announcing the Board’s decision. “John’s leadership and achievements at the Gallery have been invaluable over the past several years, and we are confident in his ability to enhance the MacKenzie’s strategic initiatives and objectives, inspire our community, and strengthen our role as a community leader in Saskatchewan and across Canada.” 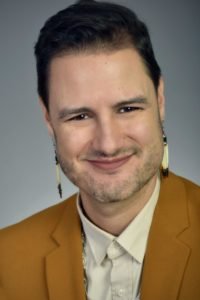 John G. Hampton (they/them or he/him) is a curator, artist, and administrator who joined the MacKenzie team as Director of Programs in October 2018. He holds a Masters of Visual Studies – Curatorial Studies from the University of Toronto, and a BA in Visual Arts from the University of Regina. John is a citizen of the Chickasaw Nation, the United States, and Canada, and grew up in Regina. He has previously held positions as Executive Director of the Art Gallery of Southwestern Manitoba, Artistic Director of Trinity Square Video, and Curator at Neutral Ground Artist Run Centre. In addition to his role at the MacKenzie Art Gallery, Hampton holds an adjunct curator appointment at the Art Museum at the University of Toronto, adjunct professorship at the University of Regina, and is the co-chair of the Indigenous Curatorial Collective board of directors.