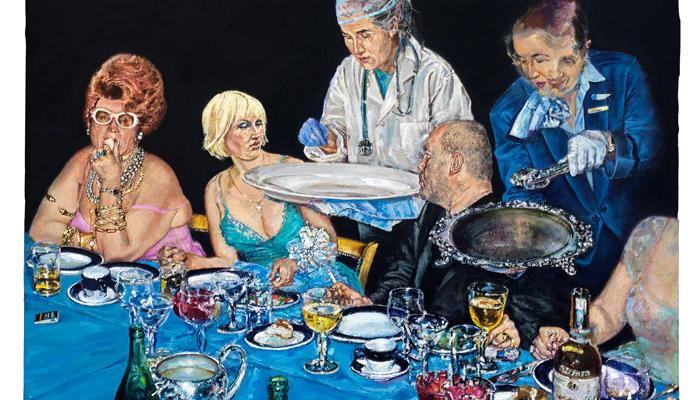 With Burden of Innocence, Canadian artist Natalka Husar takes her lifelong obsession with painting and with Ukraine, her ancestral home, into new territory and presents three interwoven narratives in the form of a history play in three acts.
In Act 1, Husar paints her own image, masked and costumed, to address the dependency between painter and subject and the anachronistic limbo in which painting currently lies.
Act 2 deals with fictitious characters that include Old Soviet-style and new-capitalist corruption collide in the collective of fictive portraits: the wheeler-dealer thugs who are put on trial not as an accusation, but as a record of the cultural and psychological damage that Ukraine has sustained.
Act 3 represents a banquet, in which the protagonists from the first and second acts reunite. Husar, cast as her dual personae, plays the waiter in her examination of the artist’s role and art’s responsibility vis à vis the social narrative.