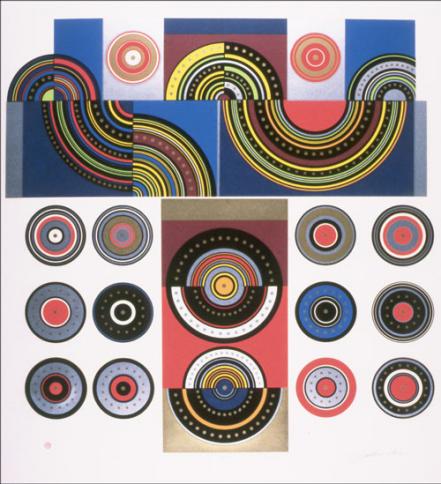 Winston Leathers (1932-2004) was a Manitoba artist, poet, and art educator best known for innovation in printmaking. Though his work had been shown nationally and internationally since the late 1950s, his Cosmic Variation series of 1972 was referred to by the artist as his “first breakthrough.”

Drawn from a generous donation to the MacKenzie Art Gallery by Kathleen Leathers, the artist’s widow, these twenty screenprints were made at a time when the Grand Western Canadian Screen Shop was providing new printmaking resources to Manitoban artists. Leathers chose to use the newly popular commercial medium of Day-Glo ink for this series, a type of ink which glows under black light. These bright inks pulse in fields of recurring spheres, creating landscapes of finely tuned colour. The overall impression is that of a chaotic yet balanced natural order—each composition in the exhibition is made up of circles that stand in for cells, solar systems, eggs, and supernovas.

Among the inspirations for these cosmic images is Zen philosophy. Leathers greatly admired the writing of Alan Watts (1915-1973), a British philosopher made famous for his role in popularizing Eastern philosophy for a Western audience. Like many mid-20th-century artists, Winston Leathers was influenced by Zen philosophy—other visual artists that were looking to the East include Ad Reinhardt and Barnett Newman, as well as Regina Five members Ted Godwin and Art McKay. Leathers also composed poetry in the “beat” style at the same time. One poem, Variation #2, will be on display with this exhibition.

Leathers’ combination of Alan Watts’ Zen philosophy with commercial materials reflects the spirit of the times: a 1970s pop culture that was carrying out the search for connection and meaning that the flower children of the 60s had began. In this context, zones of social recreation often were also zones of social transformation. These zones, referenced by the black light which activates Winston Leathers’ Day-Glo ink, were significant in that they were spaces where people could experience time differently, and return to a childlike state of wonder. In the context of Joan Scaglione’s exhibition Ribs of Sky, Ribs of Stone, Winston Leathers’ Cosmic Variations provides a window into a previous generation of artists with an interest in representing the dynamic interaction of individual and collective consciousness.

Collection of the MacKenzie Art Gallery, gift of Kathleen Leathers.