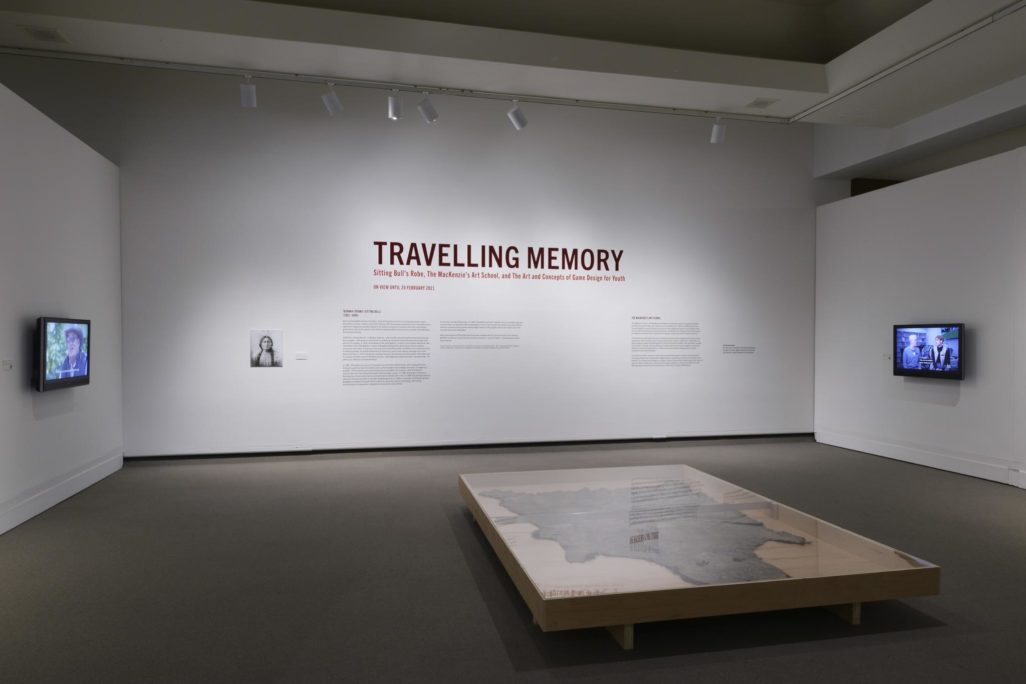 Sitting Bull’s Robe, The MacKenzie’s Art School, and The Art and Concepts of Game Design for Youth

University of Regina and Wakeling Galleries

This robe is the only remaining one known to have been painted by Sitting Bull. It was created during his time in the territory now known as Saskatchewan and painted on local bison hide that had been tanned by his wives. The robe was previously identified as “the Hedderich Buffalo Robe,” named after Gus M. Hedderich, an Albertan trader to whom Sitting Bull gave the robe. The robe contains symbols that are particular to the Sioux style, as well as custom designs that speak to his personal style, stories, and experiences. The robe entered the collection of the State Historical Society of North Dakota in 1945 and was welcomed back to this territory for the first time in more than 100 years as a loan to the MacKenzie Art Gallery. The bowl at the foot of the robe is made available for offerings made in honour of Sitting Bull, and it will be ceremonially buried following the end of this exhibition.

In the accompanying video, which can be viewed in it’s entirety here, artist and Knowledge Keeper Wayne Goodwill—great-great-grandson of Chief Black Moon Loves War (Sitting Bull’s uncle) and a member of Standing Buffalo Dakota Nation—offers his own words on Sitting Bull’s robe.

Son of Jumping Bull and Her–Holy–Door, Chief Sitting Bull was born in a Hunkpapa Lakota camp in Grand River county, in what is now South Dakota, USA. Embodying leadership virtues, Sitting Bull was a significant religious and political figure in the Lakota resistance to invasions from the United States government. He was the leader of the elite Strong Heart Warrior Society and a founder of the Midnight Strong Heart Society.

Called the “Lakota Warrior” in Western histories—and a prolific artist and spiritual and cultural leader by his people—Sitting Bull is most known for defeating Lieutenant Colonel George Armstrong Custer and his 7th Cavalry, in 1876, at the Battle of the Little Bighorn, in what is now southern Montana, USA. The Battle of the Little Bighorn, in which Sitting Bull led both the Lakota tribes and the northern Cheyenne, went down in history as a turning point in the Plains Indian resistance. As a response to this humiliating defeat, the United States Army carried out a search-and-destroy campaign across the Dakota Territory. In 1877, facing the combined forces of the US army and hired militia, Sitting Bull and his people retreated north of the Medicine Line—the Indigenous name for the US–Canada border—to what is now Alberta and Saskatchewan.

In 1881, Sitting Bull and some of his people returned to the United States, after having difficulties finding enough food due to Canadian policies that resulted in the strategic starvation of Indigenous peoples.1 These policies also placed pressure on local Métis, Francophone, and First Nations communities who had offered Sitting Bull and his people support. In 1883, Sitting Bull relocated to Standing Rock Reservation before joining the famous Buffalo Bill’s show in 1885 and gaining popularity wherever the show travelled to. He went to Washington DC in 1888 as a member of the Standing Rock delegation to dispute the government’s effort to reduce the Lakota landholdings. After being unsuccessful in his argument, Sitting Bull returned to the Grand River.

In the early morning of December 15, 1890, Sitting Bull was killed, together with his seventeen-year-old son Crow Foot, his adopted brother Jumping Bull, and ten other people, when thirty-nine police officers and four volunteers sent by Indian Service Agent James A. McLaughlin came to his camp to carry out an arrest warrant on Sitting Bull.

Many descendants of Sitting Bull and those who travelled with him continue to live on this territory. We offer our deepest respect to them and their ancestors—past and future—for allowing us to share their histories.

1 James Daschuk, “Treaties, Famine, and Epidemic Transition on the Plains, 1877—82,” in Clearing the Plains: Disease, Politics of Starvation, and the Loss of Indigenous Life (Regina: University of Regina Press, 2019), 99-126 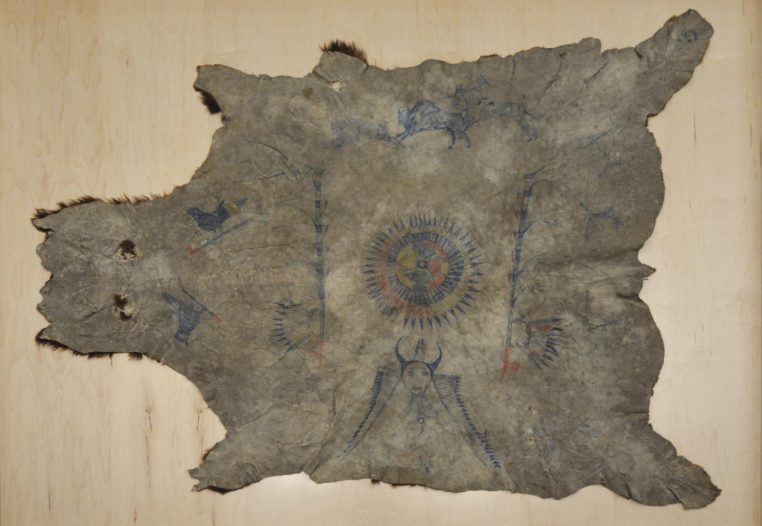 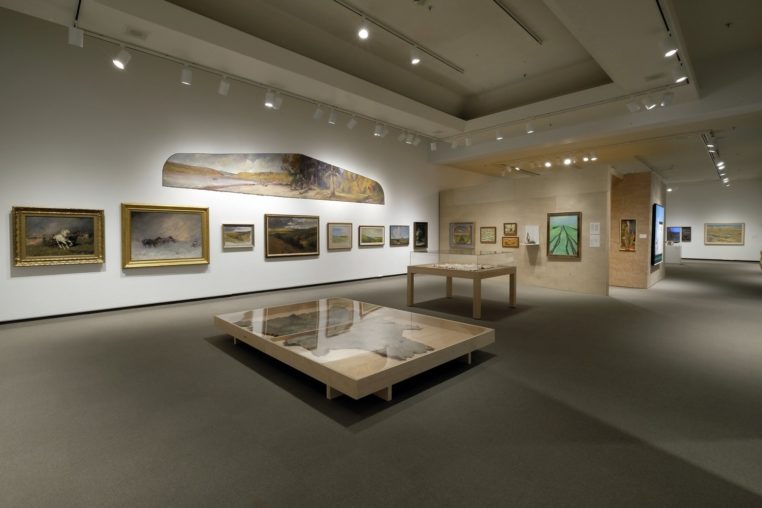 Throughout its history, the MacKenzie Art Gallery has delivered public art programming that promotes the appreciation and creation of art in everyday life. In 2019, the MacKenzie team brought together several initiatives to envision a new in-gallery art school. In consultation with local school board teachers and representatives, the MacKenzie’s Programs teams developed a pedagogical framework which represents the gallery’s values as a public cultural institution.

The Art School’s philosophy centres on delivering transformative engagements through artistic experiences. With creativity, we innovate, problem solve, explore, experiment, collaborate, and play. Creativity enables the development of skills that promote healthier lives and foster stronger communities. Through a diverse offering of creative activities that centre Indigenous and local histories, the Art School grounds us in historical narratives while making space for artistic exploration and experimentation.

The Art School offers classes for both youth and adults with diverse focuses and explorations including traditional art fundamentals, digital literacy, storytelling, movement, and nutrition and wellness. Our classes aim to address a number of these threads throughout their curricula, emphasizing certain threads to meet the needs of our diverse community.  During the pandemic, classes have shifted to online offerings which can be found here. 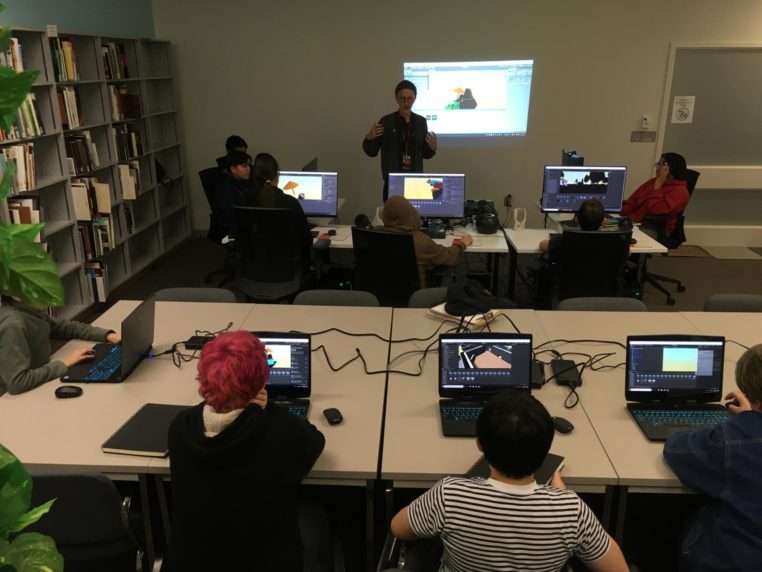 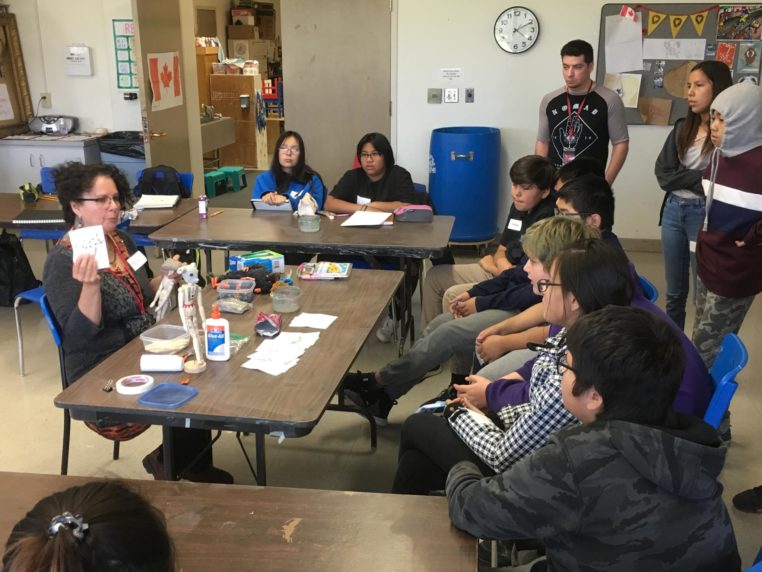 THE ART AND CONCEPTS OF GAME DESIGN FOR YOUTH

The Art and Concepts of Game Design for Youth was the first class offered by the MacKenzie’s Art School and ran from September 26 to December 12, 2019. Designed as a pilot program, the course explored the learning threads of art fundamentals, digital literacy, and storytelling through video game creation. Students began with six weeks in the studio learning character creation, concept art, and model–making techniques with instructor Sylvia Ziemann, from the University of Regina. They then applied these skills to create their personal characters in the MacKenzie’s Digital Lab using 3D scanning and game design with Unity3D.

Drawing inspiration from Sitting Bull’s robe, the students created characters and 3D environments that explored the messages found in the robe as told by Elder Wayne Goodwill from the Standing Buffalo Dakota Nation. Inspired by the robe’s mnemonic capacity, students incorporated the images present on the robe. The students’ project offers audience members an interactive experience of the story of Sitting Bull. Our students developed their own virtual environments, where visuals from the robe were integrated. Upon identifying the hidden image in the game, the player will activate the story to listen to it through their headset.

The accompanying video features documentation of the Art and Concepts of Game Design for Youth class, including in-game footage of the students’ collaborative projects.