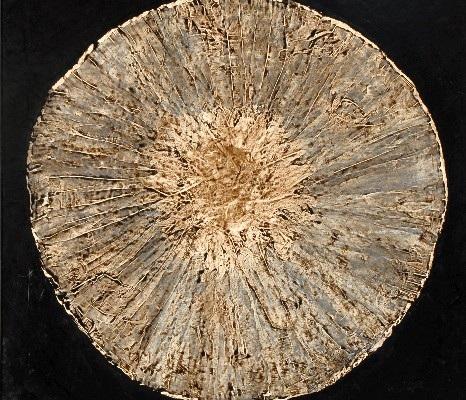 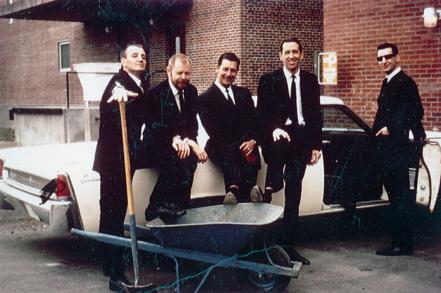 In 1961, maverick art gallery director, Ronald Bloore, mounted The May Show at the MacKenzie Art Gallery, an exhibition that would establish Regina as a leading centre of modernist abstraction for years to come. Displaying his own work in the company of paintings by fellow Regina artists, Kenneth Lochhead, Arthur McKay, Douglas Morton and Ted Godwin, along with architectural projects by Clifford Wiens, the exhibition was later picked up by the National Gallery of Canada, minus the architect, and renamed Five Painters from Regina. This exhibition looks back at the legacy of this renowned group through a selection of paintings spanning five decades by five artists.

It would have made a great album cover. Five young men in black suits, their smiles exuding a cocky self assurance as they lean casually on a classic white sedan. Taken in 1964 behind the old Norman Mackenzie Art Gallery, the photograph embodies the cultural confidence of Canada’s post-war artists. The photograph was taken on the occasion of the visit of the British High Commissioner, Sir Henry Lintott, who was scheduled to lunch with Regina’s leading group of painters, The Regina Five: Ronald Bloore, Arthur McKay, Douglas Morton, Kenneth Lochhead, and Ted Godwin. In need of a larger vehicle, Godwin had persuaded hotel owner Manny Bandas to loan him his Lincoln Continental, a car suitable for this august occasion. As Godwin relates, when he looks at this photograph today, he doesn’t see five ambitious painters, but rather their five beautiful wives in empire hemlines, looking back, including Mickey Morton, who snapped this iconic photograph.

The genesis of the photograph can be dated back three years earlier, to May 1961, when maverick art gallery director, Ronald Bloore, mounted The May Show. Displaying his own work in the company of four fellow painters, along with building projects by the modernist architect Clifford Wiens and sculptures by Wolfram Niessen, Bloore’s exhibition would establish Regina as a leading centre of modernist painting for years to come. Timed to coincide with the annual meeting of the Canadian Art Museum Directors Organization, the exhibition was immediately picked up by the National Gallery of Canada and, minus the architect and sculptor, remounted as Five Painters from Regina.

Five works from The May Show are featured on the first wall of The Regina Five: Fifty Years Later. The paintings, while showing an allegiance to Abstract Expressionism and its search for universal symbols, are diverse in their approaches to paint application and composition. Although united by a shared ambition, the five painters did not subscribe to a common manifesto or a singular aesthetic. The label “The Regina Five” has always been more a flag of convenience than a shared identity.

As a shared group, The Regina Five was short-lived. By the end of the 1960s, three of the five had left Regina to take up teaching positions in universities across the country: Lochhead to the University of Manitoba (1964), Bloore and Morton to York University (1966, 1969). Only Godwin and McKay continued at the University of Regina where they taught until their retirement. Even before dispersing, fractures had occurred. Some felt that Bloore should have included Roy Kiyooka in the original show, despite his move to Vancouver in 1960. Bloore himself was suspicious of foreign influences, especially that of controversial New York art critic, Clement Greenberg, who was invited by Lochhead to lead the 1962 Emma Lake Artists’ Workshop. Individual conflicts and rivalries between group members are legendary.

The Regina Five: Fifty Years Later looks back at this renowned group through a selection of paintings drawn from the vault of the MacKenzie Art Gallery and from local collections. It acknowledges the amazing productivity of these artists, who as individuals pursued their practices vigorously through the years, reinventing themselves in response to changes in their lives and artistic conditions. Though now reduced to one living member, Ted Godwin, the group lives on in work that vibrates with the same energy that burst onto the walls of the MacKenzie fifty years ago.