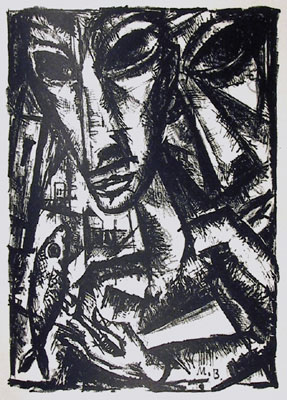 An artist's engagement with the permanent collection by Sarah Abbott. Organized by theMacKenzie Art Gallery with the support of the Canada Council for the Arts, the Saskatchewan Arts Board, and the City of Regina Arts Commission.

As a gesture of respect, please remove your shoes before ascending the memorial for The Last Fish.

What an honour to be second in the line of artists invited to dive into the vaults of the MacKenzie Art Gallery and emerge with an intervention culled from its broad collection. Thank you.

Water, the lifeblood of all species and the planet, flows into the concepts of interconnection and disconnection at work in my exhibition The Last Fish. If the ratio of the total amount of water on the planet to the total amount of available fresh water was calculated into terms we could easily comprehend, it would look like a five-litre container full of all the water, with the available fresh water not quite filling a teaspoon [Marq De Villiers, Water (Houghton Mifflin Company, 2000)]. This worrisome image becomes more alarming when we factor in such strains on that water as population growth, pollution and the general Western tendency to think of water as ubiquitous. Humans can survive a month without food, a week without water.

Johnny Aculiak’s exquisite stone carving Fish quickly became the seed of my exhibition and inspired the title. It reminded me of the projection by international ecologists and economists that by the year 2048, saltwater fish and sea creatures would be depleted almost to the point of irrevocable loss due to overfishing, pollution, habitat erosion and climate change. Moments later, as I wandered between the shelves of sculpture, Mark Prent’s extreme Aeronast offered a poignant counterpoint to the fragility of Fish. Together, the sculptures focused my curating around this idea: when we hear of the extinction of a species, or an animal joining the endangered list, people rarely stop to consider that we too are a species, at risk of the same fate.

The tension between the creepy, confrontational Aeronast and the simulated pilgrimage to The Last Fish divides the Peggy Wakeling Gallery. On one side, we see capitalism’s drive for progress and, on the other side, that which has been lost in the process. In each room, the works reflect on life and things passed; objects, lifestyle and mindset; spirit and the intangible. The works’ meanings expand in complexity as they are considered in relation to the exhibition’s themes, their placement in relation to one another, and how they resonate with the narrative’s consideration of the past, present and future.

Only the general ideas at work in The Last Fish are outlined here because, as with my filmmaking, I feel a work is most powerful when the visitor arrives at their own conclusions first. A more detailed curator’s statement is included in the exhibition. I invite you to celebrate the exhibition by writing a letter to The Last Fish about the thoughts and feelings it evokes for you. This can be done in the Creative Response Area at the end of the Shumiatcher Sculpture Court. The Last Fish marks the first public viewing of Aeronast at the MacKenzie Gallery.

Artist Biography:
Sarah Abbott is a filmmaker and artist whose work engages issues of being, human rights and the environment in a variety of genres. Her film and video work has received numerous grants, awards and international festival selections for over fifteen years. In 2004, she completed her first feature-length documentary, Tide Marks, about an aspect of post-apartheid South Africa. Sarah currently teaches as an Assistant Professor in the Department of Media Production and Studies at the University of Regina. She holds a BA Hon. in Film Studies and Drama from Queen’s University and an MFA in Art Video from Syracuse University.

An artist’s engagement with the permanent collection by Sarah Abbott. Organized by the MacKenzie Art Gallery with the support of the Canada Council for the Arts, the Saskatchewan Arts Board, and the City of Regina Arts Commission.