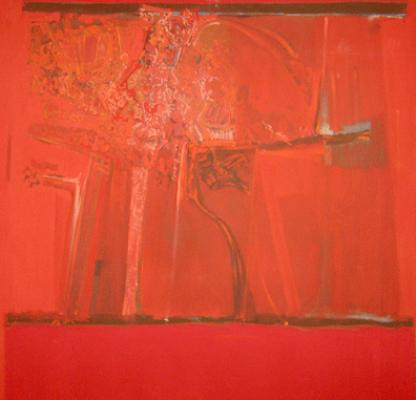 Curated by Ann Davis. This exhibition is made possible by the generous support of Denise LaForge, J.F. Mackie & Co Ltd., Mike and Jane Anne Smith, Keith and Jayne Smith, Bob and Barb Shaunessy, The Forge Advisory Group at CIBC Wood Gundy, the Alberta Foundation for the Arts and the University of Calgary.

Calgary artist Ted Godwin is one of Canada’s most important senior artists. This exhibition,Ted Godwin: The Regina Five Years, 1957-1967, is a timely and detailed examination of the early years of his career. The late 1950s and the 1960s were a dynamic time in Regina, when a group of artists, later known as the Regina Five, challenged the status quo and conservatism of the time. They burst onto the national scene with an exhibition at the National Gallery of Canada in 1961, and became part of a North American avant-guard movement, one no longer based solely in New York. As the youngest member of this group, Godwin achieved prominence at the age of 28.

This exhibition concentrates on Godwin’s work from his Regina period. It includes revealing paintings, seminal works on paper and one playful neon piece, all executed with new found freedom and emotional power, what he called “the big attack.” Like contemporary jazz musicians, whose work Godwin continues to admire, he exploded tired structures and improvised new forms. The intuitive and the organic were of lasting
importance in his art.

Artist Biography - Ted Godwin was born in Calgary and attended the art school now called the Alberta College of Art and Design. After moving to Regina in 1958, he joined the staff of what is now the University of Regina in 1964, teaching there until he returned to Calgary in 1985. He has continued to paint, producing lyrical landscapes, and publishing his book Messages from the Real World: a Handbook for the Emerging Artist. For his many contributions to the art of this country, in 2005 he was named Officer of the Order of Canada.

Organized and circulated by The Nickle Arts Museum