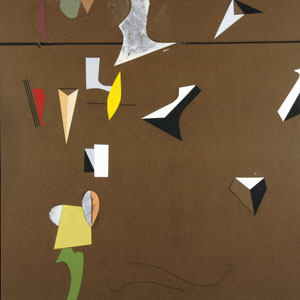 After four decades of painting white on white, Ronald Bloore, one of Canada’s preeminent non-representational painters, has returned to colour. This exhibition presents works from the past decade-and-a-half, including fourteen recent oil paintings in which semi-geometric figures of pure and vibrant colour float against dark chocolate fields of oil-stained masonite.

This exhibition offers an opportunity to reflect on the major lines which Bloore’s career has followed. As a member of the Regina Five, whose ambitious abstract paintings astonished the Canadian art establishment in the early 1960s, Bloore made his mark with an innovation. Instead of brush on canvas, he scraped oil paint directly on masonite, a modern construction material. Always concerned with the historical relationship of art to architecture, Bloore’s choice of support signalled a disaffection with the Western obsession with painting as a “window on nature.” In the place of illusion, Bloore offered a surface—a wall—which, like the sides of a cave or an Egyptian temple, he covered with iconic markings.

Bloore has often spoken of “Giotto’s Error”—the Renaissance artist’s choice to paint the sky blue, a decision which set Western art on the path of illusionism. Following a trip to Greece and the Near East in 1962 - 63, Bloore underlined his rejection of illusionism by embracing a monochromatic palette of various whites. White dominated Bloore’s paintings until 2002, when the occasional patch of red began to creep into his work; by September 2004, colour regularly appeared in a series called “Dark Chocolate.” At this critical juncture, the austerity of his earlier production began to soften. The tension between the analytical and the sensual which had existed beneath the surface of his earlier work, erupted and intensified with the injection of highly emotive colour.

The final aspect of his work which has come to the fore in his recent production is its suggestiveness, its felt connection to lived experience. It is tempting to see in his colour elements emotive analogues for the individual, yet interconnected self. How they are painted is important. Lovingly rendered with a precise inexactitude, the coloured elements float in an intense, yet casual relationship to each other. These are “fragments of infinity”—a phrase which Bloore himself used to describe these works—figures individually incomplete, yet suggestive of an endless potential for growth and relationship. As the latest fruit of a long and distinguished career, there is much to savour in these remarkably constructed paintings.