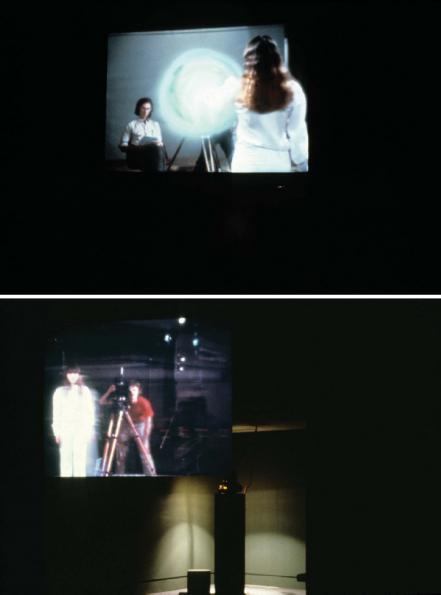 Projections is the first major exhibition in Canada to focus on the rich history of experimentation with slide, film and video that characterizes contemporary art from the 1960s to present. The works in this exhibition exemplify why projection—using light, slides, film, video, and television—has become such a compelling medium.

If cinema is the most dominant manifestation of projection in contemporary culture, the works in this exhibition draw on its constituent elements in unexpected, surprising, and most of all reflective ways. From do-it-yourself constructions to full-fledged recreation of the movie-house environment, some works seek to unravel the cinematic integration of sound, image and movement; others exceed the immersive effects of mainstream film through loops, doublings, slide dissolves, two-sided projection, as well as single and multiple channel video projections. The exhibition, rather than proposing a chronological reading, features four interrelated parts—the screen, light, travel, and theatre of projection—each focusing on a specific element of cinematic projection and its conceptual implications, and within each a history unfolds. Curated by Barbara Fischer and circulated by the Justina M. Barnicke Gallery, this will be the most comprehensive single-site presentation of the exhibition outside of Toronto and will occupy the entire exhibition space of the MacKenzie Art Gallery. Artists represented in the exhibition include: David Askevold, Rebecca Belmore, Janet Cardiff and George Bures Miller, Ian Carr-Harris, Stan Douglas, Murray Favro, Wyn Geleynse, Rodney Graham, David Hoffos, Mark Lewis, Kelly Mark, Nathalie Melikian, Michael Snow, Jana Sterbak, Robert Wiens, and Krzysztof Wodiczko.

Projections Curator Barbara Fischer is the Director/Curator of the Justina M. Barnicke Gallery at Hart House, University of Toronto, as well as Senior Lecturer in Curatorial Studies in the Department of Art at U. of T. She has worked as a curator in galleries and museums across Canada, including at Open Space Gallery, Walter Phillips Gallery, Art Gallery of Ontario, and the Power Plant. In 1999, she took the position as curator and then Director/Curator of the Blackwood Gallery at the University of Toronto at Mississauga, which under her leadership developed as an important, nationally acclaimed centre for contemporary art through exhibitions, off-site/on-campus installations, publications, national and international circulating exhibitions.

She has curated and written catalogue essays for solo exhibitions of Fastwurms, Stan Douglas, Kelly Mark, Euan Macdonald, and Rebecca Belmore, as well as one of the most widely circulated exhibitions internationally: General Idea Editions 1967-1995(i.e. Kunstverein Munich, Kunstverein Zurich, Kunst-Werke Berlin, CAAC Seville, Henry Art Gallery Seattle, and the Andy Warhol Museum Pittsburgh). She has curated major group exhibitions of Canadian and international artists such as Social Space (1984),Signs (1988), Re-enactment (1990), Love Gasoline (1996), Foodculture (1997), spilled edge soft corners (1999), Logo-city (2000) New Modular (2002), and most recentlyProjections, the first major survey on projection-based works in the history of contemporary art in Canada (2007). She co-curated Soundtracks (2003) and Make Believe (2006) with Catherine Crowston. Fischer has taught courses and lectured across Canada on issues in contemporary art and curatorial studies. Her writings have appeared in exhibition catalogues and anthologies, including Naming a Practiceand foodculture. She is the recipient of the 2008 Hnatyshyn Award for Curatorial Excellence in Contemporary Art. She is the curator for Mark Lewis, at the Canada Pavilion, for the 53rd Venice Biennale in 2009.

Projections has been made possible in part through contributions from the Canada Council for the Arts, the Ontario Arts