Experience Exhibitions Morehshin Allahyari: She Who Sees the Unknown

Morehshin Allahyari: She Who Sees the Unknown 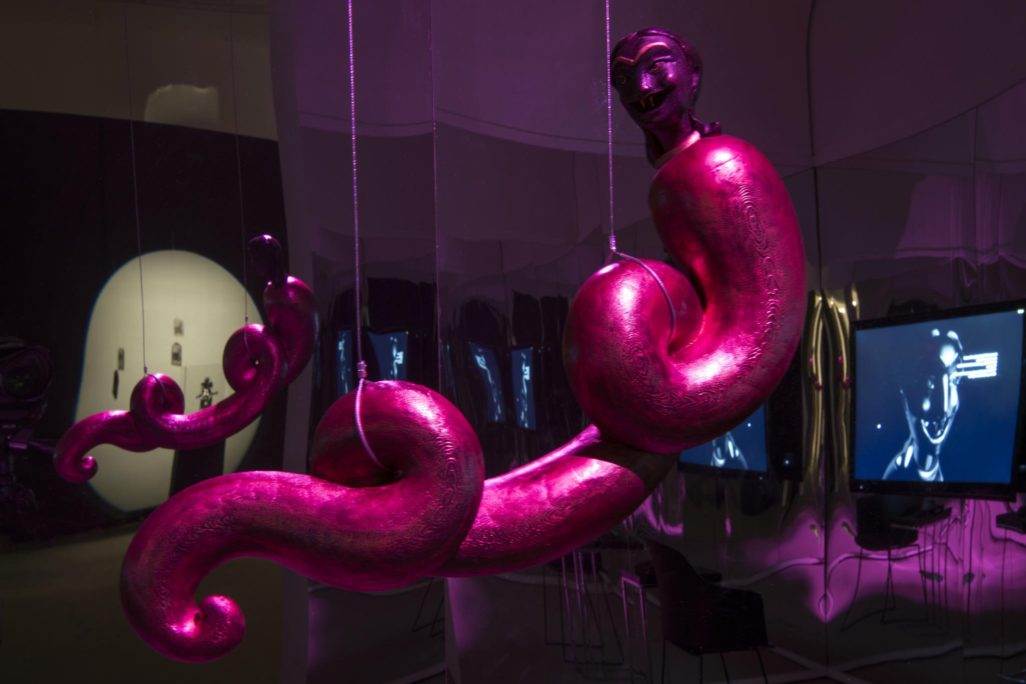 The MacKenzie Art Gallery is pleased to announce Morehshin Allahyari: She Who Sees The Unknown, the most comprehensive exhibition to date of the New York-based Iranian artist’s ongoing research project into female and gender non-binary monsters and jinn, of Middle Eastern origin. Curated by John Hampton, Director of Programs at the MacKenzie Art Gallery, Morehshin Allahyari: She Who Sees The Unknownis the first exhibition to bring together the three figures known as Huma, Aisha Qandisha, and The Laughing Snake, and will be on view from May 25 through August 25, 2019.

Started in October 2016 as part of Allahyari’s residency at Eyebeam in New York City, the She Who Sees The Unknown project is part of a process Allahyari refers to as ‘refiguring,’ or the act of going back into the past to retrieve elements that have been forgotten or misrepresented over time, in order to help reimagine another kind of present or future. In this case, Allahyari revives the stories of various jinn who were seen as tremendously powerful figures but either came to be seen as negative, or have been written out of the canon of largely male “superhero” stories. Allahyari embraces the monstrosity of these figures and resituates them in contemporary narratives where their powers can change perspectives on the present and the future. For Allahyari, ‘refiguring’ is a ficto-feminist and activist practice that challenges today’s power structures and social realities.

Allahyari begins her process by researching and collecting an archive of images and texts relating to each jinn figure. Following this, she 3D models—or scans—and prints an image of the jinn, modeling them on various ancient illustrations. Allahyari then creates new narratives for these figures in time-based medium, using storytelling to ‘refigure’ the figures into a new set of imagined possibilities for time and space. Finally, she animates them through a series of Ha’m-Neshini (Sitting Together) and Fabulation Stations: intimate public performances, events, and discussions that bring together fiction, theory, and activism in collaboration with artists, scientists, and activist women from the Middle East.

At the MacKenzie, the three figures of Huma, Aisha Qandisha, and The Laughing Snake will each occupy their own site-specific shrine-like new media installation. Huma, a jinn known for bringing heat to the human body and who is responsible for the common fever, will be exhibited among 3D-printed mashed-up versions of talisman sourced from Allahyari’s research. Aisha Qandisha, a jinn known for possessing men and completely opening them to the outside world, will be displayed as a vertical projection in a reflecting pool of blood-like liquid. The Laughing Snake originates in the myth of a monstrous snake-like figure who takes over a city and begins killing animals and people, causing chaos until someone suggests the only way to kill a snake is to have it look at its own reflection in a mirror. Rather than dying, the snake laughs unstoppably for many days before self-destructing. The Laughing Snake will be displayed suspended from the ceiling in a room filled with mirrors.

For each of these jinn, Allahyari has reappropriated the traditional mythologies and ‘refigured’ the jinn into new stories in the form of poetic spoken and video narratives. For example, Allahyari uses the concept of The Laughing Snake and the mirror to consider the laughter of the snake as a position of power, and her self-destruction as an act of agency over her own body and image. Each installation is intended to create a space of reverence for the “monstrous other;” recasting the supposedly negative and often misrepresented female figure into sources of strength, new balances of power, and ideas for alternate futures.

Alongside these three installations, the MacKenzie will be displaying the first stages of Allahyari’s growing archive monstrous and jinn figures in a research-oriented reading room. Since no such archive currently exists, Allahyari is undergoing active research with collaborators and first-hand texts and objects, which will eventually be compiled into a book that will be freely distributed through a web archive. Visitors to the MacKenzie will be able to explore this archive on iPads provided in the reading room.

Using a four-part process involving research, 3D-modeling and printing, storytelling, and community involvement, Allahyari re-creates jinn figures and uses the traditions and myths associated with them to explore colonialism, patriarchism, and environmental degradation in relation to the Middle East. 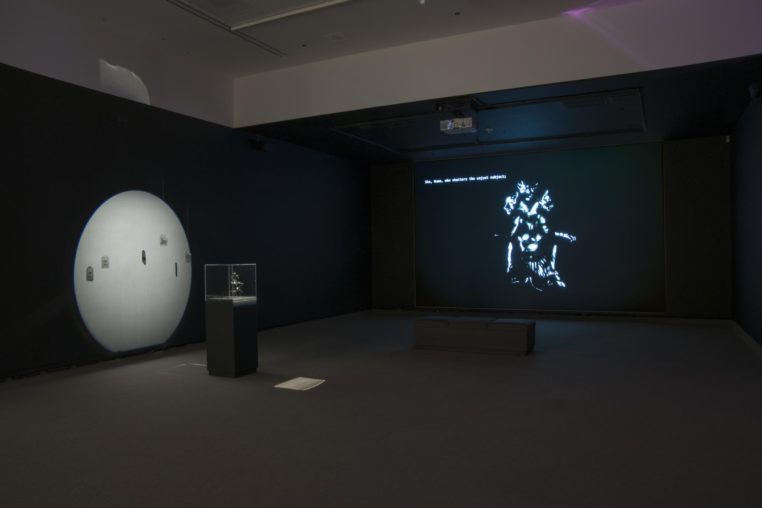 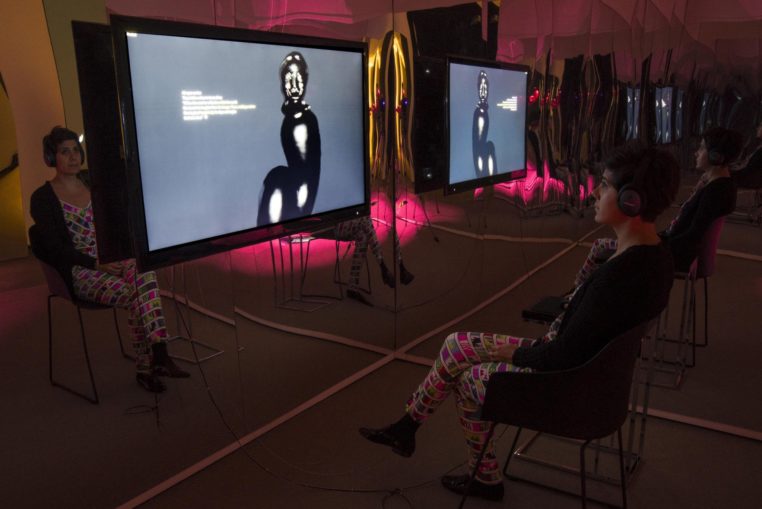 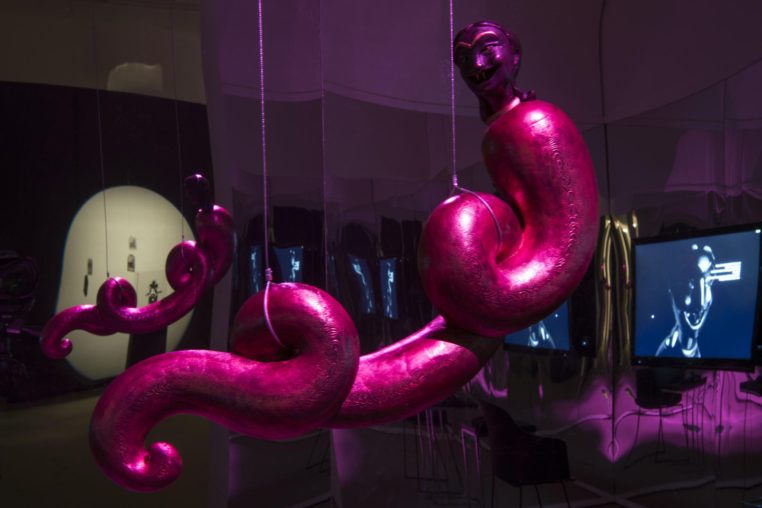 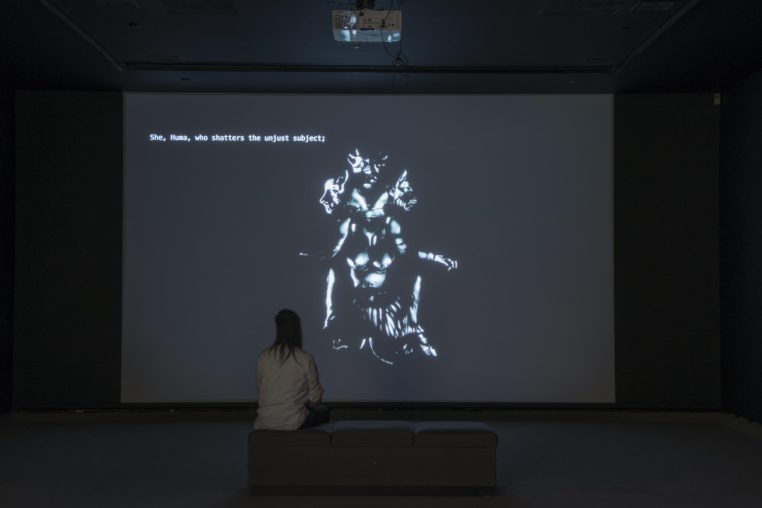 She Who Sees The Unknown is a site of devotion to the dark feminine, the monstrous other, the non-binary and all who exceed populist acceptance. This exhibition offers shrines to three figures — Huma (( هوما ), Aisha Qandisha عيشة قنديشة) ), and The Laughing Snake ( (مار قهقهه — drawn from Morehshin Allahyari’s ongoing research project into female and gender non-binary monsters and jinn of Middle Eastern origin (commonly referred to as genies in the West). Each figure is accompanied by a narrative adapted from established mythologies and legends.

Allahyari re-ignites this traditional wisdom, ensuring it is alive and relevant for our tumultuous present while honouring the source material of this unique piece of Middle Eastern history. While each shrine can be appreciated for its own unique beauty, Allahyari’s complex layering of process, material, narrative and atmosphere can also create new ways of understanding how we carry cultural memory in our artifacts, archives, and bodies — particularly within current digital contexts. Her choice of subjects challenges us to reconsider our relationships and reactions to those who society has traditionally deemed monstrous or unworthy of worship/divinity. Allahyari champions individual and collective sovereignty as a radical and transgressive act that makes way for new cultural realities.

One of the main terms that I have developed in relationship to this body of work is Re-Figuring, as a form of feminist and activist practice. Re-figuring is about activation and preservation. It is an act of going back and retrieving the past. How can we re-imagine another kind of present and future through re-articulating the past—especially the kind of past that is forgotten or misrepresented? The stories of these jinn portray monstrous figures who are powerful but have taken a back seat to male mythical figures and have had their power increasingly presented in a negative light over time. Through embracing the “monstrosity” of these figures, I hope to give birth to new beings and becomings that are able to challenge and change the power structures that exist in our political and social realities. She Who Sees The Unknown reflects on the effects of historical and digital colonialism and other forms of oppression and catastrophe, in a practice of Re-Figuring forgotten figures and re-situating their histories.

In Islamic culture and teaching jinn are known as supernatural creatures. According to the Quran, jinn are shape shifters made of smokeless fire; occupying a parallel world to that of mankind. Together, jinn, humans and angels compose the three sentient creations of Allah. Unlike Angels who have no ability to obey or disobey, jinn have the power of choice and will. In Iranian traditions, jinn are fearsome and honoured. My upbringing in Iran was full of ancient mythical narratives, all involving extraordinary and supernatural beings. The childhood bedtime stories, told to me by my grandmother, were about her memories of encounters with jinn, usually in the public bathouse of her village. When jinn possess humans, they guarantee an utter openness. A new kind of entrance, portal, and arrival to the outside. For me, this is what makes them attractive candidates for an act of Re-Figuring. When thinking about technology, potential futures and new worlds, it is perhaps time to think outside of Donna Haraway’s concept of the “cyborg” (hybrid machine-human beings) in order to stretch our imagination to a new set of figures that do not come from white/Western knowledge structures. If Haraway claimed to be “a cyborg rather than a motherly/earthy goddess,” I claim to be a jinn rather than a cyborg.

Aisha Qandisha is one of the most honored and fearsome jinn in Islam. She is known as the opener. When she possesses a man, she does not take over the host but opens them to an outside storm of incoming jinn and demons; making them a traffic zone of cosmic data. Aisha never leaves; she resides in the man to guarantee their utter openness. The only way to stay sane when possessed by her is to submit to her. If one does not open up for this process of destruction and rebuilding, it will result in incurable delirium and madness. In this video, Morehshin Allahyari uses Aisha Qandisha’s power and possession to revisit a personal love story, as a process for opening, closure, revenge, healing and forgetting.

Huma is a Jinn known in various Middle-Eastern tales and myths as a demon who brings heat to the human body and is responsible for the common fever and other figures. She is pictured as a demon with three heads and one or two tails. In this video, Allahyari tells a story where Huma’s power of bringing heat is interpreted through the lens of one of the greatest horrors of our time: global warming.

The various myths told about The Laughing Snake depict a monstrous figure (some believe a jinn), who has taken over a city and its lands, murdering its people and animals. Over the years there were many attempts at destroying this jinn, but none were successful. One day, an old man living in a cave comes forth with a revelation: the only way to kill the snake is to hold a mirror in front of her. When they do so, the snake sees her own image in the mirror and starts laughing. She laughs for days and nights until she self-destructs and dies. In Morehshin Allahyari’s re-telling, she reflects on a series of personal and imagined stories of hysteria, delirium, sexual abuse, impositions of morality, and the experience of living in a female-designated body in the Middle-East. Allahyari wants to reconsider the snake’s laughter as a position of power with self-destruction as an act of ultimate agency over her own body and image. 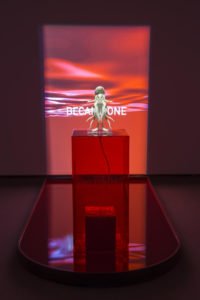 “Morehshin Allahyari is challenging cultural norms and reclaiming the narrative of these ancient mythical figures [jinn] with her She Who Sees The Unknown series.”

“The goddesses evoked, summoned and given offerings to in She Who Sees the Unknown are dark goddesses, chosen for the ominous powers they evoke and for the ways those powers relate to contemporary issues related to colonialism.”

“She Who Sees the Unknown means more of us can say we’ve seen a jinn. We’ve also seen radical possibilities embodied in smokeless fire – the power to slash gender-based oppression, immolate the environment and dismantle power structures.”

“Morehshin Allahyari’s exhibition, She Who Sees the Unknown in Regina, Saskatchewan at The MacKenzie Gallery showcased a different kind of radical empathy, one that empathizes with the marginalized and urges a usurpation of the forces that dissimilate to, as Allahyari says, 'colonize the colonizers.'”

Morehshin Allahyari is an artist, activist, writer, and educator. She was born and raised in Iran and moved to the United States in 2007. Her work deals with the political, social, and cultural contradictions we face every day. She thinks about technology as a philosophical toolset to reflect on objects and as a poetic means to document our personal and collective lives and struggles in the 21st century. Morehshin is the co-author of The 3D Additivist Cookbook in collaboration with writer/artist Daniel Rourke.

She is the recipient of the leading global thinkers of 2016 award by Foreign Policy magazine. Her 3D Additivist Manifesto video is in the collection of San Francisco Museum of Modern Art, and recently she has been awarded major commissions by Rhizome, New Museum, Whitney Museum of American Art, Liverpool Biennale, and FACT to work on developing different components of her current project She Who Sees The Unknown. 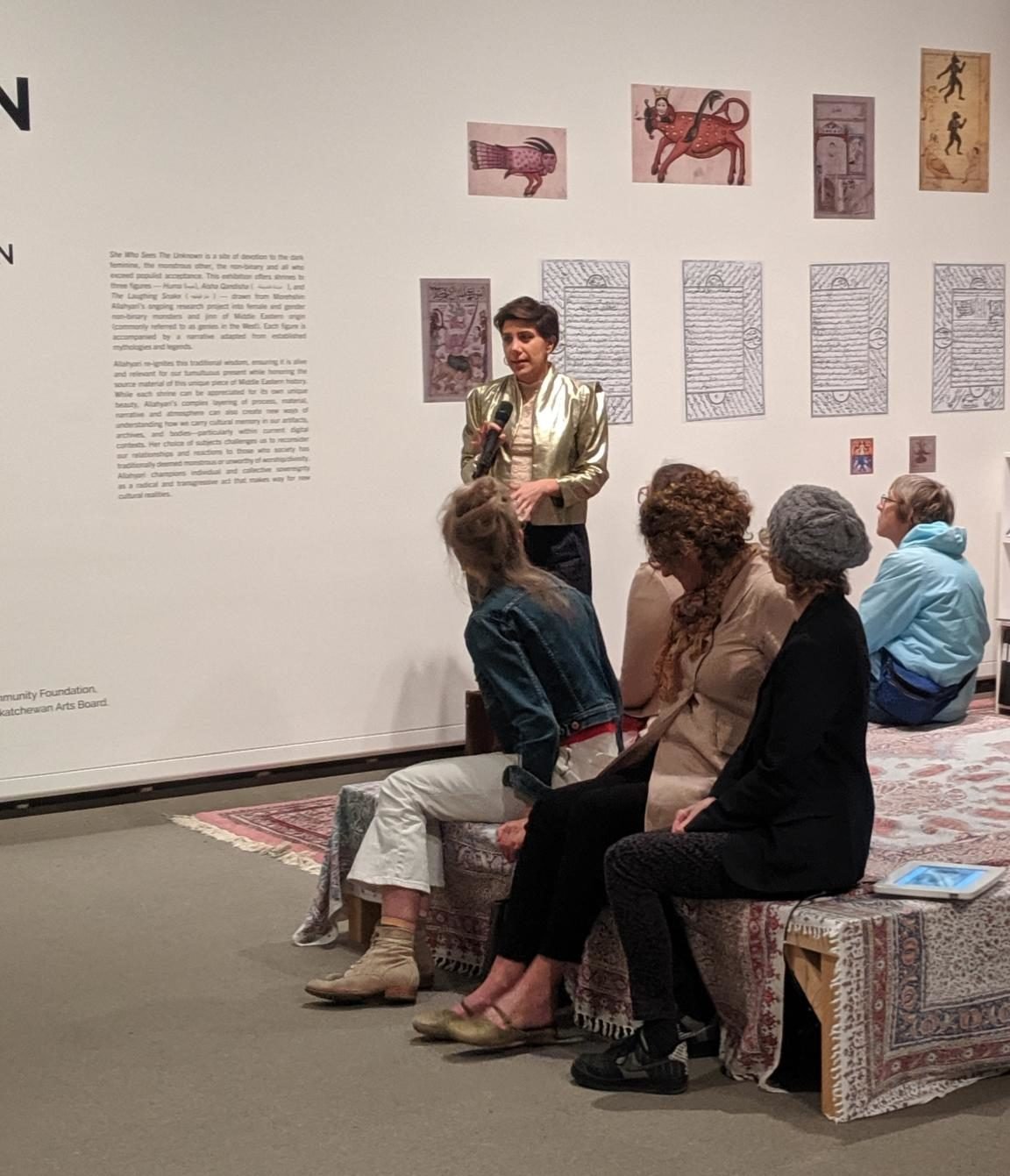