Experience Exhibitions Let Me Be Your Mirror

Let Me Be Your Mirror 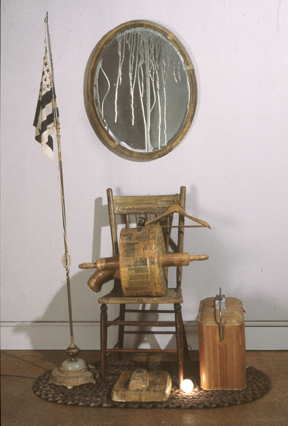 The mirror in Edward Kienholz’s National Banjo on the Knee Week offers one of the most unsightly reflections in contemporary art: you, the viewer, as the head of a phantom, dysfunctional family.

The mirror in this pivotal work from theMacKenzie Art Gallery’s collection implicated the viewer in America’s contradictory obsessions: endless consumption (Coke cooler) and perennial weight loss (weight scale), attachment to home (sitting room chair and rug) and desire for mobility (suitcase), family valued (encased baby) and patriotic sacrifice (tattered “Stars and Stripes”). Kienholz holds a “mirror to the world,” but places viewers where they likely don’t want to be.

Taking as starting points Kienholz’s tableau and the concurrent exhibitionWarhol: Larger Than Life, this exhibition finds its roots in the 1960s. As North America settled into its Cold War schizophrenia of anxiety and optimism, musicians and artists alike began holding a mirror to consumer society and its promises of material fulfillment. “Let me be your eyes… I’ll be your mirror,” lyrics recorded during Warhol’s taping of the Velvet Underground in 1967 provide the title for the exhibition.

Roy Lichtenstein’s comic-book-inspired work, represented by one of his blank mirrors, offer an ironic and distanced reflection of society that is in stark contrast to the romantic heroism of the abstract expressionists. The ideas latent in pop art find full expression in Dan Graham’s conceptual video and performance work of the 1970s. Graham’s brilliant performance Performer/Audience/Mirror gives a perfect illustration of the truth behind all advertising: that we only ever want what others want, or what we imagine they want.

In the work of the five contemporary Canadian artists in the exhibition, we catch sight of how the use of the mirror has gone from a self-aware subversion of mass-produced desire to an uncertain threshold between life and its simulacra. Vikky Alexander’s photographs of an apartment showroom take the viewer into a world of glass, mirrors and high-end furniture. Her work carries on Kienholz’s use of mirrors to place the viewer in the illusory of consumer culture, although the viewer’s exact position is more difficult to locate. Ken Lum’s pavilions also reference commercial codes through the use of texts that recall advertising slogans. Located on mirrors, these short statements force a complex questioning of how identity is formed in the specular space between world and image.

Chris Cran’s paintings of mirrors stylistically recall Lichtenstein’s non-reflective reflections. However, the ultimate subject of these works is the triangle of viewer, artist, object, held up for self-critical reflection. Nicolas Baier’s sightless mirror also harkens back to Lichtenstein’s mirror prints, but the introduction of digital printing, with its potential for simulation, threatens to dissolve the hard edges of the subject/object divide.

Adad Hannah’s videos of frozen figures appear at first to be stills, but upon closer inspection reveal themselves to be actors holding extended poses. Recent works have included mirrors, such as a still of a woman applying make-up in a mirror. The uneasy arrangement of mirrors, set up with a Hitchcockian eye, intensifies the engagement with the subject of being an object. In a nod to Dan Graham’s groundbreaking work, Hannah will create a new video for the exhibition in which he restages Performer/Audience/Mirror thus creating a mirror of this historical moment that brings into question our understanding of Graham’s earlier critique.

Let Me Be Your Mirror takes the straightforward idea of art as a “mirror on the world” and turns it on itself by introducing the one thing that can never be adequately represented, a mirror. In the process, the viewer’s position before mirrors, both real and represented, is placed in question as part of a larger inquiry into social structures that govern desire and its production. This exhibition, which launched the MacKenzie’s “Mirror Series,” is the first of three exhibitions dealing with mimetic structures. The second exhibition, tentatively titled Double Take will explore the use of doubled or mirrored projections, while the third in the series, tentatively titled My Evil Twin will explore the use of doubles and doppelgangers.

Organized by the MacKenzie Art Gallery with the support of the Canada Council for the Arts, the Saskatchewan Arts Board and the City of Regina Arts Commission.