On the surface, John Noestheden and Shuvinai Ashoona represent an unlikely pairing for joint solo shows. Noestheden, who has recently moved from Regina to Hamilton, is widely admired for his crystalline visions of the cosmos. Ashoona, a much sought-after Inuit artist, is the creator of startlingly original images of the land inspired by her Cape Dorset home.

In 2008, Calgary curator Wayne Baerwaldt invited the artists to collaborate on a monumental banner for the Stadthimmel (City Sky) project in Basel, Switzerland. The result was Earth and Sky, a drawing with both Arctic landscapes and astronomical bodies, which the artists transferred to a 40-meter-long outdoor banner that caught the eyes of spectators on the street below. A second banner was produced for Toronto’s Nuit Blanche later that year. The outdoor banner will appear next at the 18th Biennale of Sydney  summer of 2012.

In recognition of this important international project, the five-metre-long preparatory drawing for Earth and Sky will be on display along with other collaborative drawings, linking the two exhibitions.

For the past twenty years, John Noestheden has produced large-scale works on paper. The history of astronomical observation has inspired a good portion of that work, from the flaming tails of Halley’s comet embroidered into the Bayeux tapestry to the latest galactic revelations from the Hubble Space Telescope. Ironically, signal noise and loss of fidelity are as much a part of these images as the desire for true knowledge.

The exhibitions Sky and Earth offer a chance to consider the remarkable visions of two artists working from two different cultural perspectives. While the images differ, the questions are the same. How do we know what we know? What is the ground of our existence and the limits of our vision? Their artworks help articulate our place in the cosmic order, while acknowledging the boundaries of our comprehension. 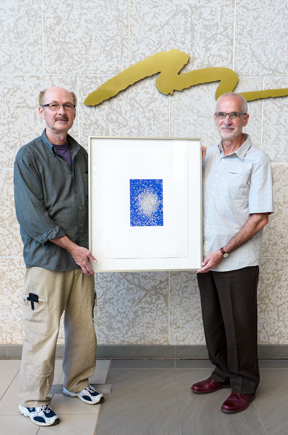 The Bet Your Lucky Stars Contest was open to all visitors who visited the John Noestheden: Sky and Shuvinai Ashoona: Earth between August 1st and 19th, 2012. We would like to Congratulate the Bet Your Lucky Stars Contest winner Robert Troff! Robert guessed the exact number of estimated 32,832 stars in John Noestheden’s work Milky Way Mirrors 24 x 36 using math and averaging, and became the proud owner of an original Noestheden work. Thank-you to everyone that participated.

In the videos below, John Noestheden shares his cosmic inspiration in his works.