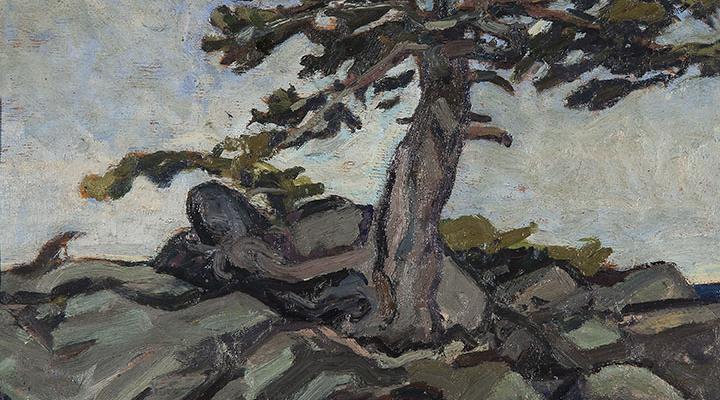 Rivals for a Pine Tree: Norman MacKenzie and Frederick B. Houser
It was the one that got away. Regina collector Norman MacKenzie (1869-1936) had never shown much interest in the landscapes of the Group of Seven (1920-1933) prior to joining the Board of the National Gallery of Canada in 1925. However, in 1927, one painting by Arthur Lismer, Pine Tree and Rocks, grabbed his attention with its striking depiction of a “gnarled, knotted, powerful tree” clinging to the rocks above Georgian Bay. When he approached the artist to buy the canvas, he found that it had already been sold. Disappointed, MacKenzie inquired whether the sketch for the painting might be for sale. To the collector’s surprise, the sketch arrived in Regina a few months later–a gift from Lismer in appreciated for MacKenzie’s backing at a moment when the Gallery was being criticized for supporting the Group. Expanding Horizons: Collecting the Group of Seven reunites for the first time in nearly ninety years the original sketch and finished painting, recently cleaned and conserved, as part of a wider discussion about the motivations for collecting and studying the Group of Seven.
The man that MacKenzie lost out to, Federick B. Housser (1885-1936), was one of the Group of Seven’s most fervent advocates. His motivations for collecting the likes of A.Y. Jackson, Arthur Lismer, J.E.H. MacDonald, Franklin Carmichael, and Lawren Harris came from a close personal knowledge of the Group’s members and a shared interest in the development of a truly Canadian art movement, one rooted in the country’s vast and varied landscapes. A sketch by Lismer shows him as an intimate part of this circle, which frequently met at the Arts and Letters Club in Toronto. A financial editor for the Toronto Star, Housser channelled his experiences, which included back country sketching trips with his first wife, the painter Bess Larkin Housser (later wife of Lawren Harris), into the first history of the Group, A Canadian Art Movement: The Story of the Group of Seven (1926). Upon his death in 1936, his collection passed into the hands of his second wife, Yvonne McKague Houuser, also an artist and friend of the Group. Over time she donated nearly thirty works to Museum London, including paintings in this exhibition by Harris, Lismer, MacDonald, and Frederick Varley.

Expanding Horizons: Collecting at the MacKenzie Art Gallery
Despite Norman MacKenzie’s hesitancy to embrace the new horizons opened by the Group of Seven, the MacKenzie Art Gallery has been undaunted in its ambition to build a collection of this formative group, initially through key purchases, and then by donations, the Gallery has assembled a small, but fascinating representation of their achievements. The purchase of an early canvas by Lawren Harris, which shows the influence of Group predecessor Tom Thompson, and a large World War One naval scene by Arthur Lismer, the gift of the Regina Boat Club, are among the chief acquisitions. Since 1990, the MacKenzie Art Gallery has added over a dozen works by the Group of Seven to its collection thanks to generous donations by Harry Kangles, Elizabeth and Donald MacPherson, the Estate of Norah McCullough, John R. Mastin, and Norman and Sadie Ratner. Many of these works have never before been exhibited, including canvases and watercolours by Franklin Carmichael, A.J. Casson, A.Y. Jackson, Arthur Lismer, and J.E.H. MacDonald. This exhibition offers a rare opportunity to view these works and appreciate the many valuable contributions of donors to expanding the horizons of the collection.

Ties to a New Home: Fred Mendel and the Group of Seven
Paintings collected by Fred Mendel and gifted to the Mendel Art Gallery prior to the example of an avid collector with a particular investment in the nationalist message of the Group of Seven. Mendel was a Jewish refugee from Germany who immigrated to Canada in 1939. A successful entrepreneur with a European appreciation for culture, Mendel began to collect work of the Group in the 1940s as a way to establish connections to his new home. As curator Matthew Teitelbaum notes, his significant collection of Group of Seven artists reflected “an immigrant’s desire to come closer–in this sense materially–to a particular history. Mendel’s collection of works by painters with such clear and ever-present nationalist sympathies underlined this desire.” In 1965, one year after the founding of the gallery that bore his name, Fred Mendel donated thirteen paintings to the Gallery’s permanent collection, including canvases in this exhibition by A.Y. Jackson, Arthur Lismer, and J.E.H. MacDonald. These works became the core of the Gallery’s collection of historical art, a nucleus which has attracted subsequent donations over the years.

Expanding West: Prairie Ties to the Group of Seven
Expanding Horizons considers not only the motivations for collecting the Group of Seven, but the impact on prairie artists who have embraced aspects of their vision. The Group itself realized, toward the end of its existence, the need for members from outside Ontario if they were to become a truly national movement. In 1932, Winnipeg artist Lionel LeMoine FitzGerald became their first Western member. Earlier, the Group’s impact was felt in the West through the work of young Saskatchewan artists, Frederick Loveroff and Illingworth Kerr, who studied at the Ontario College of Art in Toronto where Lismer, MacDonald and Varley taught. In the 1940s, A.Y. Jackson joined W.J. Phillips and H.G. Glyde at the Banff School of Art where his influence was felt particularly among teachers taking summer courses, such as Regina’s Ruth Pawson. Although the Group’s influence on the development of Canadian art waned in the post-war period, Regina Five members Kenneth Lochhead and Ted Godwin paid homage to the Group in their landscapes of the 1980s and 1990s. Mashel Teitelbaum, who hosted what may have been Regina’s first exhibition of the Group of Seven at his short-lived Yellow Door Gallery (1946-7), articulates what many artists have felt in the wake of the Group. In describing his own landscapes of the 1970s, he notes: “I am not painting the actual Georgian Bay, I am just painting the Group of Seven’s Georgian Bay…I am just reinterpreting their vision.”

Who’s the Group of Seven?
Expanding Horizons: Collecting the Group of Sevenoffers a window into the activities of Canada’s best known school of landscape painters, who were active as a collective from 1920 to 1933. Based in Toronto, they gained notoriety for rejecting the stale academic traditions of their day in favour of a direct response to Canada’s rugged wilderness, most famously the northern Ontario landscapes of Algonquin Park and Georgian Bay. Their membership included Franklin Charmichael, Lawren Harris, A.Y. Jackson, Frank Johnston, Arthur Lismer, J.E.H. MacDonald, and Frederick Varley. Emily Carr and Tom Thomson, often associated with the Group, were never officially members. Thomson died shortly before their formation, but had significant influence on their development. A.J. Casson was invited to join the group in 1926 as a replacement for Johnston; in a move to expand beyond Ontario, Edwin Holgate (Montreal) became a member in 1930 and Lionel LeMoine FizGerald (Winnipeg) in 1932. Though celebrated as Canada’s first national school of art, their aesthetic contains echoes of post-impressionism, Art Nouveau, and contemporary Scandinavian painting. In recent years, their depictions of an “empty” landscape devoid of its original Indigenous inhabitants has been the starting point for critical reflections, such as the concurrent exhibition, Maria Hupfield: East Wind Brings a New Day. Why the Group of Seven has stirred such intense interest over the years is a fascinating question, one which this exhibition addresses through the eyes of collectors and fellow artists.