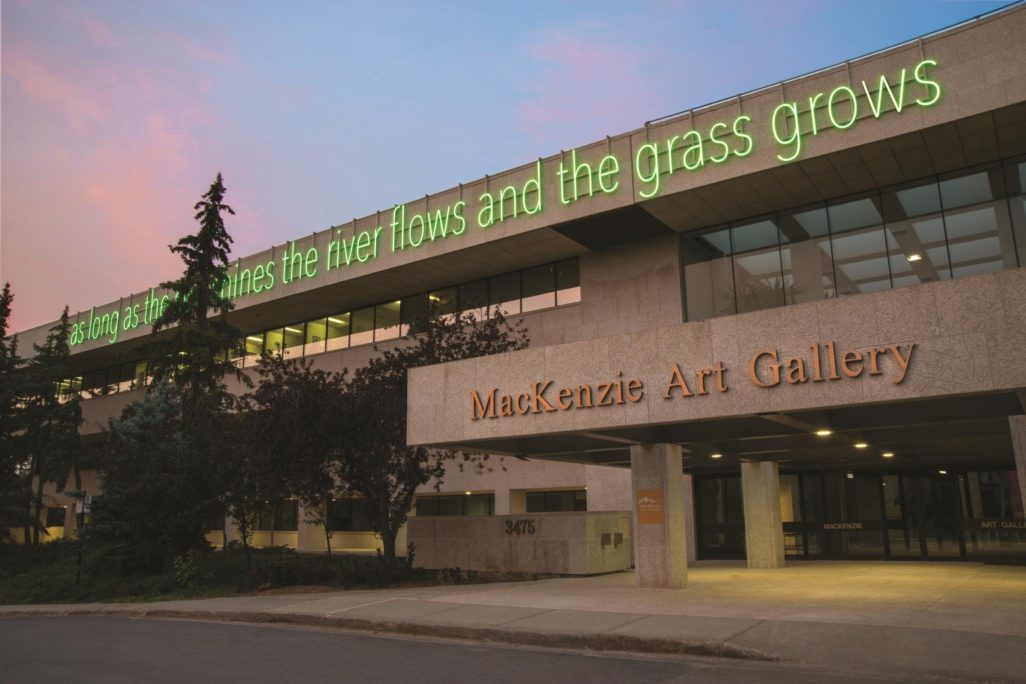 The MacKenzie Art Gallery presents a newly commissioned artwork, Kâkikê / Forever (2018) by Omaskêko Ininiwak (Cree) artist Duane Linklater. The artwork will be installed on the façade of the T.C. Douglas building. Kâkikê / Forever is a text-based, site-specific work that responds to various aspects of its location. Drawing from unattributed Indigenous words spoken during the making of treaties: “As long as the sun shines, the river flows, and the grass grows,” Kâkikê / Forever poetically reflects Canada’s conflicted past, charged present, and future (post) colonial imaginary.

The MacKenzie Art Gallery is situated within Treaty 4 territory, the traditional home of the Cree, Saulteaux, and Métis peoples, and a home to the Lakota, Dakota and Nakota people. Treaty 4 was signed in 1874 between First Nations and the British Crown at Fort Qu’Appelle.

The artwork was one of three shortlisted works in a selection process for the MacKenzie’s Transformative Landscapes project – a series of programs presented over the summer of 2017 on the occasion of Canada’s 150th anniversary of Confederation. The series included panel discussions, artist talks, film screenings, an in-gallery engagement space, and workshops focused on the themes of public art, reconciliation, inter-cultural relations, and national commemoration. The public was invited throughout these events to reflect and comment upon the proposed works of art. This artwork will become a welcome addition to the MacKenzie’s permanent collection which includes over 5,000 works of art, spanning 5,000 years.  Kâkikê / Forever will complement other outdoor artworks on the grounds of the Gallery, and will transform the skyline of Regina.

“What is suggested in this phrase is the passage of time, or the duration of how long these treaty agreements and relationships will last,” says the artist.

“These words act as an entrance into the conceptual frameworks Indigenous people were, and are, using when articulating a new and potentially mutually beneficial relationship with settlers.”

Linklater continues, “I hope this work can speak this way, and more to the audiences of the MacKenzie Art Gallery.”