Canon Fodder: a series of questions 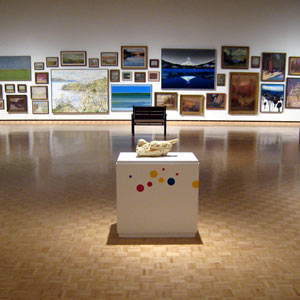 Historically landscape painting is linked to a highly politicized and tumultuous time — the industrial revolution. At precisely the time in European history when people were relinquishing their direct contact with the land, landscape painting emerged in Europe as a legitimate genre.

It was beautiful, nostalgic and safe, but it was also layered with social critique and concepts of ownership, land use and the emergence of a new class of the working poor. In Canada, the tradition of landscape painting, once legitimized and accepted as part of the canon, persisted as a romanticizing force. In the creation of a National Canadian identity the land takes precedence: the people are secondary. In the prints of Cape Dorset, the opposite is true; perhaps the absence of land in these landscapes is again reflective of ownership. In a culture previously nomadic, the idea of physically owning land may not be a reasonable concept. Or maybe the landscape is so much a part of the people and their understanding of place that it doesn’t need to be, or can’t be, represented? These questions and more will be examined in Canon Fodder, the first in a series of artist “engagements” into the permanent collection of the MacKenzie Art Gallery.

An artist’s engagement with the permanent collection by Seema Goel. Organized by the MacKenzie Art Gallery with the support of the Canada Council for the Arts, the Saskatchewan Arts Board and the City of Regina Arts Commission.