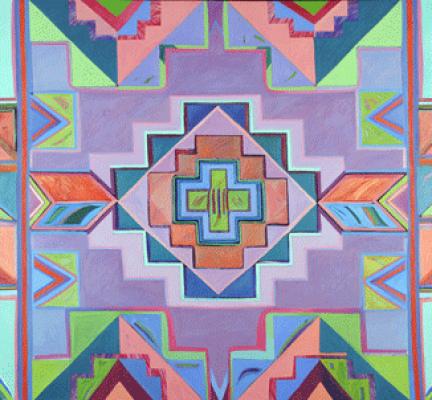 Bob Boyer: His Life’s Work is the first major retrospective of Bob Boyer, a nationally and internationally renowned artist, art historian, curator and educator. Boyer’s influence is far-reaching and interwoven among the communities of art, education and culture. This touring exhibition and the accompanying publication are a celebration of the art, life and critical contribution of this influential artist. Sixty paintings in diverse media trace his career from 1968 to 2004.

CLICK HERE FOR A VIRTUAL TOUR OF THE EXHIBITION

Although he lived his entire life in Saskatchewan, Boyer’s work was inspired by his extensive travels throughout North and Central America, Asia, Europe and Scandinavia. Boyer began his artistic career in the late 1960s, painting highly representational portraits and landscapes. By the late 1970s, he experimented with large-scale abstract oil paintings, using vibrant colours informed by personal experiences and the artistic traditions of Northern Plains Aboriginal people. While Boyer worked in a variety of media throughout his career, he is perhaps best known for his acclaimed series of blanket paintings completed between 1983 and 1995. Using flannel blankets as the painting surface, Boyer combined elements of historical Northern Plains design with personal symbology and contemporary references. For the most part, these “blanket statements” are politically-charged depictions of the devastating impact of colonial imperatives upon Aboriginal philosophies, land, religions and cultures. During the last decade of his life, Boyer experimented with a variety of media, including fresco, and produced work which celebrated Indigenous experience, cosmology and spirituality throughout the world. While his untimely death in August 2004 leaves an enormous sense of the incompleteness of an abundant life, Bob Boyer’s art leaves a legacy of a life’s work that is fully complete.

Early Influences
Boyer graduated from the Regina Campus of the University of Saskatchewan with a Bachelor of Education (Art) in 1971. The late 1960s and early 1970s were a time of great change and intense activity within the Art Department at the University. Studio courses fostered creative experimentation, and encouragement from professors, such as Ted Godwin, led Boyer to develop his own personal aesthetic approach.
Following his graduation from the University, Boyer lived and worked for several years in northern Saskatchewan. His time in northern Saskatchewan was pivotal to the future direction of his art. He travelled extensively to many remote communities, frequently by floatplane, and learned to tan hides and build birch-bark canoes.
These early journeys throughout northern Saskatchewan began a process of travel and exposure to different approaches in art, materials, and landscapes which would become central to Boyer’s formation as an artist. In this environment, where forests obstruct the horizon line, his stylistic approach changed dramatically, and his paintings became less representational and more complex in their ideas.
Towards Abstraction
Boyer’s knowledge of the design, philosophy, and spiritual meanings of traditional First Nations art increased enormously after he joined Saskatchewan Indian Federated College (SIFC) in 1978. His paintings from this time reflect an evolving conceptual transition that propelled him completely into abstraction. Sun Dance Shield (1980) is an early example, in which Boyer incorporates geometric motifs derived from traditional Northern Plains structure and design.
Boyer’s adoption of traditional artistic vocabulary as his own personal symbology is fully consistent with culture-specific artistic traditions of the Northern Plains First Nations. For Boyer, a straightforward “decoding” of the symbolic meaning is neither easy nor entirely necessary for an appreciation of his work. Boyer first introduced bilateral symmetry in his paintings during this period as well: a design principle that distinguishes his paintings from this time on.
“The Perfect Portable Art Work”
Boyer’s first blanket, A Smallpox Issue (October 1983), heralds a new direction from painting on canvas to painting on cotton blankets. By then, his artistic vocabulary had come to embrace motifs drawn from Northern Plains artistic traditions and other Indigenous cultures.
In June 1983, Boyer was part of a delegation from SIFC that travelled to China. In Mongolia, he found inspiration in the abstract designs which decorated both the interior and exterior of traditional yurts. The qualities of practicality and portability, which yurts shared with Northern Plains tipis, also provided an impetus for his transition to painted blankets.
Boyer’s early blankets were highly socio-political in subject matter. Later blanket paintings celebrate Indigenous cultural traditions, geography, and architecture throughout the world.
In 1994, Boyer created what was likely his last painted blanket: Portrait of the Artist as a Storm. Two bilaterally-symmetrical, representational images of a horse depict Boyer’s artistic dilemma at the time. He emerges from this “storm” with reaffirmation and resolute belief in a greater spiritual focus for his future paintings.
Spirit Connections in Time and Place
Boyer continued to experiment with a variety of surfaces. In 1992, he began to paint on burlap, preferring the loose compliancy of its course texture over that of closely-woven canvas. In 1995, he began to use a fresco technique where, instead of plaster, Boyer substituted drywall compound on plywood, for reasons of durability and portability.
By the mid-1990s, Boyer’s work had become looser and more introspective, filled with whimsical and, at times, playful images readily identifiable as birds, fish, people, angels, and other figurative elements. The stylistic transition reveals a fusion of spiritual philosophies and symbolic visualizations inspired by the traditions of Indigenous peoples throughout the world. At the same time, his work becomes more personal, drawing on his own life stories. Memories of travel, dancing, conversations, and late nights on the powwow trail inspired much of Boyer’s art at this time.
For Boyer, the interrelationships of celestial, worldly, human and physical were gifts from the spiritual world. In the final decade of his life, his work would blend these interrelationships in a way that was seamless, while remaining as intriguing and complex as the artist himself.

The exhibition will be shown at several venues across Canada and will be accessible to all Canadians, both during and after the tour, via the web, as part of the Virtual Museum of Canada. The Bob Boyer: His Life’s Work Online Exhibition is to be launched online June 2009 through June 2014 and will reinforce, complement and extend the national touring exhibition.

The exhibition Bob Boyer: His Life’s Work is organized by the MacKenzie Art Gallery in collaboration with the Canadian Museum of Civilization. This project is proudly presented by Casino Regina and has been made possible in part through a contribution from the Museums Assistance Program, Department of Canadian Heritage / Ce projet a été rendu possible en partie grâce à une contribution du Programme d’aide aux musées du ministère du Patrimoine canadien.CBC Saskatchewan is the media partner for this exhibition.