Babylon + on + on is at the MacKenzie and available online 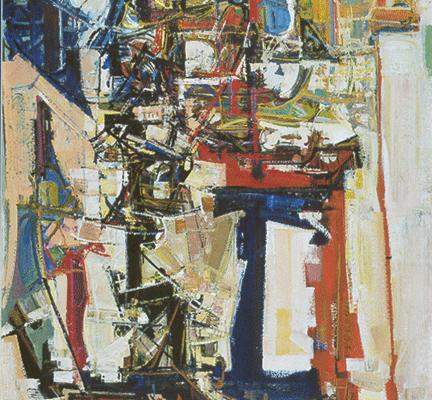 New communications technology and a historic painting are the starting point for Regina new media artist Lee Henderson in this, the third of a series of interventions into the MacKenzie’s permanent collection. The sound scape for Lee Henderson'sBabylon + on + on is available online here.

The Tower of Babbling (1955) by the audacious Toronto painter Harold Town was the surprising first purchase by the fledgling MacKenzie Art Gallery in 1958. According to correspondence from the artist at the time of the acquisition, the abstract painting “represents my recreation of my reaction to the building of a C.B.C. television station near my studio.” Town, whose studio overlooked the construction site, began the painting at the start of construction and completed it as the building was finished. The painting not only provides a visual equivalent to the noise and energy of a construction site, but also reflects on the sound and images which would emanate from the building during its useful life. As such, this artwork provides an ideal point of departure for an interactive digital artwork that investigates both the sound and media contexts of the viewing experience.

In Henderson’s sound and net.art installation, visitors to the Gallery will encounter The Tower of Babbling hanging within construction scaffolding. At the same time they will hear looped samples of their own speech, construction sounds and excerpts of news archives. A computer console will allow visitors to create their own intervention into the mix of sounds, which will be generated in part by their presence in the space, and in part by visitors to the online component of the engagement.

The effect will be to project the viewer into a position analogous to that of Harold Town as he contemplated the immediate spectacle of the CBC construction site, while at the same time considering the future spectacle of images and sounds which would be broadcast from that location. The ultimate goal is to give viewers the opportunity to reflect on their dual position as participants and creators in today’s media-interactive environment.

In April 2007 the MacKenzie Art Gallery initiated a series of artist’s interventions into its permanent collection which has so far resulted in two thought provoking installations:Canon Fodder: looking at landscape by artist Seema Goel and The Last Fish by filmmaker Sarah Abbott. This series has been motivated by two goals: to investige the meanings of the collection through a community dialogue that touches on a variety of social issues; and to question the conventions of display. With Babylon + on + onthese lines of inquiry will be extended to an exploration of interactive digital technologies and the World Wide Web.

Organized by the MacKenzie Art Gallery with support from the New Media Initiatives Program of the Saskatchewan Arts Board.