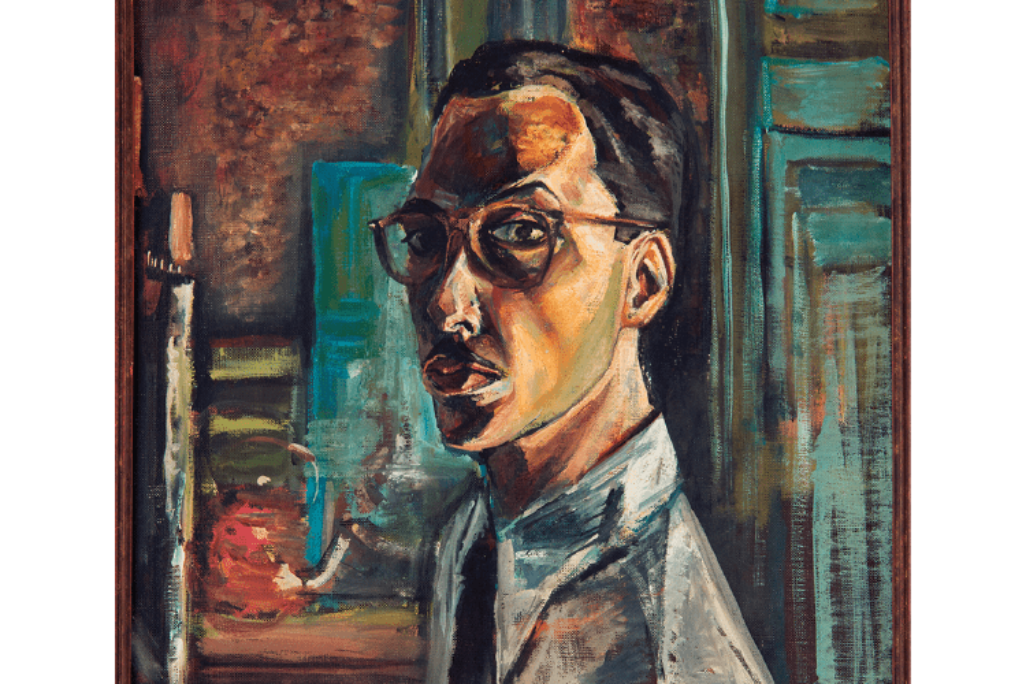 Over the course of his lengthy career, Regina-born artist Anthony Thorn pursued a distinctive vision that united painterly craft with a deep knowledge of artistic traditions from around the world. This exhibition celebrates a recent acquisition of forty-eight works from the collection of Tony Colella, Thorn’s most important collector for nearly three decades. The exhibition affords a broad understanding of the major developments in Thorn’s career, and recognizes a generous financial gift from Lyn Goldman, Thorn’s sister, that accompanied the acquisition.

Thorn was among the first generation of artists to experiment with abstraction in Regina during the 1950s. After studies in Chicago, Paris, and Mexico City, he forged an independent path, drawing on diverse currents of twentieth-century art, a broad knowledge of art history, and a concern for the spiritual dimensions of human experience, to develop his own, intensely personal style of artmaking.

Thorn is notable for having worked under the great Mexican muralist David Alfaro Siqueiros during a sojourn in Mexico City in 1955. Moses Diptych, recently restored and included in the adjacent exhibition, Ten Artists of Saskatchewan: 1955 Revisited, bears witness to the visionary intensity of Thorn’s Mexican work.

In his essays for the recent publication, For the Honour of Art: Essays and Opinions, Thorn reveals himself to be an independent mind tuned to the many currents of philosophy, art history, and religion that shaped twentieth-century art and thought. Together with his work, they present a portrait of a painter who reveled in his craft and the enchanting lore of the studio.

Anthony Thorn is the adopted name of Arthur Goldman, born in Regina in 1927. He studied English literature at the University of Saskatchewan and University of Chicago before taking up painting in 1948. Classes with Kenneth Lochhead at Regina College led to further studies at the Art Institute of Chicago and Banff Centre. A move to Paris in 1953 allowed him to study stained glass at the Centre d’Art Sacré and drawing at the Académie de la Grande Chaumière. In 1955 Thorn was apprenticed to prominent muralist David Alfaro Siqueiros in Mexico City where he also studied acrylic technique with José Gutiérrez. He attended the 1957 Emma Lake Artists’ Workshop led by Will Barnet. In later years he studied watercolor and sumi painting with Mataichiro Isoda in Kyoto, Japan, and metalsmithing in Corfu, Greece.

Thorn’s work has been exhibited widely in Canada as well as in France, Mexico, the Canary Islands, and the United States. His work may be found in public collections, including: Art Gallery of Greater Victoria, Greater Victoria Public Library, MacKenzie Art Gallery, and SK Arts. Thorn was a Lecturer in Fine Arts at Lakehead University in Thunder Bay (1977–1979) and an Instructor in painting for the Department of Extension at the University of Victoria (1981–1984). A gifted writer, he served as art critic for the Toronto Citizen (1971–1972). Anthony Thorn lived in Victoria, British Columbia from 1980 until his death in July 2014.

Listen to artist Anthony Thorn in conversation with writer-broadcaster and long-time friend Garry Gaudet. The clips highlight Thorn’s early years in Regina, student days, and reflections on life as an artist. Courtesy of Garry Gaudet and the University of Regina Archives and Special Collections.

Listen to the Interviews Here

Anthony Thorn, Memory of Corfu, 1988, oil and enamel on linen. Collection of the MacKenzie Art Gallery.

Anthony Thorn: For the Honour of the Art

This publication honours the life and legacy of artist Anthony Thorn (1927–2014).Texts and essays that he wrote late in life have been thoughtfully edited by Lyndon Grove. These are Thorn’s observations on art and making, social and cultural connections, and his lifetime of work with a deep interest in materials and historical techniques—from making paintings to making ‘things’, such as his self-described wall jewels and other objects. In this way, and through his work, Thorn embraced hallmarks of the Western Renaissance, while being true to his times. The connective tissue of Thorn’s writings offers a view into the what and the how of subject and technique; the latter is always of interest to artists who wish to achieve a transcendence beyond the enchantment of the eye. This is Thorn’s ‘for the honour of the art’.