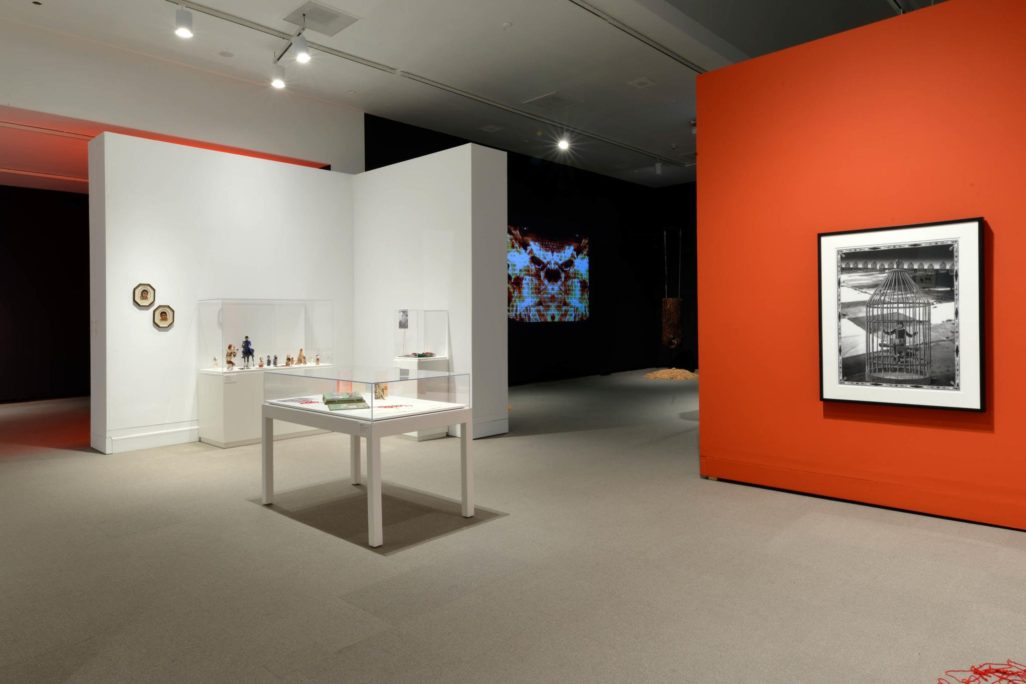 Join us with participating artists in conversation about their work featured in, Touching Earth and Sky, curated by Felicia Gay. Each artist has beautifully interpreted a poignant understanding of oneself and their understanding of agency and connection as Indigenous people from Turtle Island.

This event will be livestreamed to the MacKenzie Art Gallery’s social media, including its Facebook, YouTube, and website. Live closed captioning will be provided. The transcript for the recording will be available on the exhibition page after the program.

This program may feature discussion related to residential schools and trauma.

Judy Anderson is Nêhiyaw from Gordon First Nation, SK. Her practice includes beadwork, installation, hand-made paper, painting, three-dimensional pieces, and collaborative projects all of which are deeply personal with a focus on issues of spirituality, family, colonialism and Indigenous epistemological and ontological traditions. Her current work is created with the purpose of honouring the people in her life and Indigenous intellectualizations of the world. In addition, she has also been researching traditional European methods and materials of painting, methods she has been adapting and assimilating into traditional Indigenous arts.

Casey Koyczan is a Tlicho Dene interdisciplinary artist from Yellowknife, NT, that works with various mediums to communicate how culture and technology coincide together alongside the political, economic, and environmental challenges that we are presented with. A portion of his large-scale installation work utilizes earth materials to evoke the idea of nature reclaiming architectural space, returning to its original place of being. Inspired by sci-fi and Indigenous Futurisms, Koyczan implements various techniques of interactivity, audio-video, and the engagement of the bodily senses to raise awareness about a variety of topics within his creations.

His artwork has been shown nationally and internationally, and has participated in many residencies, exhibits, festivals and collaboration projects in parts of the world such as Finland, Colombia, Chile, Mexico, and The Netherlands. He is also a musician, producer, filmmaker, actor, writer, teacher, workshop facilitator, graphic designer, web designer and advocate for future generations of artists and musicians.

Shelly Niro is a member of the Six Nations Reserve, Bay of Quinte Mohawk, Turtle Clan. Shelley Niro is a multi-media artist. Her work involves photography, painting, beadwork, and film. Shelley graduated from the Ontario College of Art, Honours and received her Master of Fine Art from the University of Western Ontario. Niro was the inaugural recipient of the Aboriginal Arts Award presented through the Ontario Arts Council in 2012. In 2017 Niro received the Governor General’s Award For The Arts from the Canada Council, The Scotiabank Photography Award and also received the Hnatyshyn Foundation REVEAL Award. Niro recently received an honorary doctorate from the Ontario College of Arts and De-sign University. She also was the 2019 Laureate of the Paul de Hueck and Norman Walford Career Achievement Award for Photography.

Julia Rose Sutherland is a multidisciplinary artist whose work explores the trauma and social issues, associated with her aboriginal roots as a Mi’kmaq woman of the Metepenagiag Nation. Sutherland addresses systems of commodification, representation, worth, and current identity politics surrounding Indigenous People of North America.

Bradley LaRocque is a multi-disciplinary artist currently based in Saskatoon. LaRocque is a co-founder of Tribe Inc. an important advocate and artist run centre for Indigenous artists both regionally and nationally. His more current work reflects an interest in the idea of memory-mapping and located space to express the complexities of colonial violence and trauma.