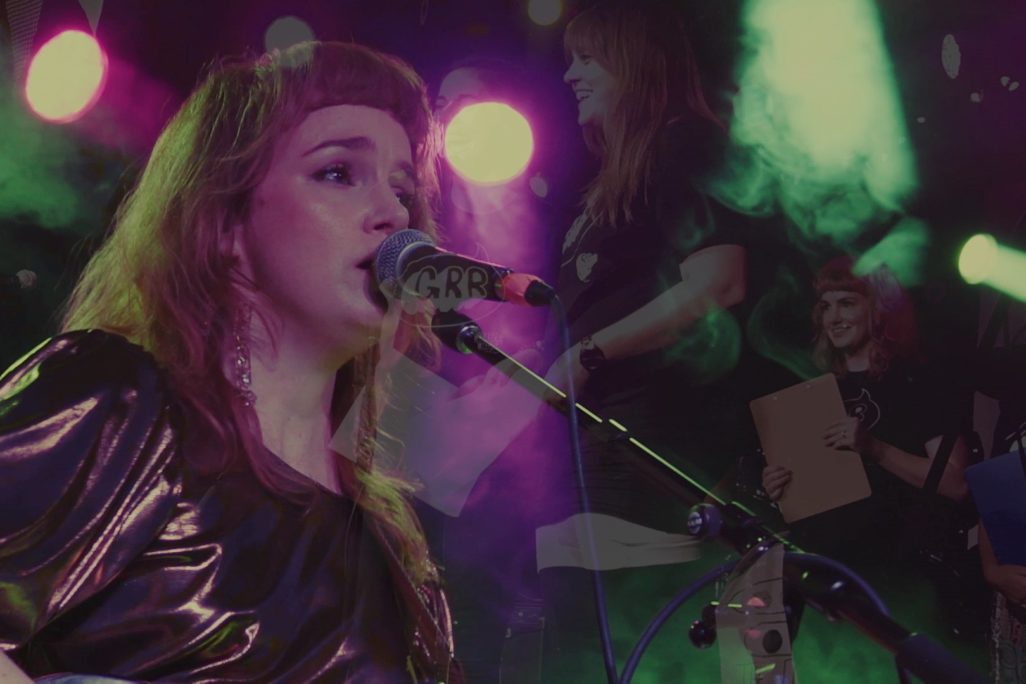 Join the MacKenzie Art Gallery and Queer City Cinema on 16 September at 7:30 PM CST for Thursday Lates: Performatorium of Queer Performance, featuring a screening of the documentary “I’m Gonna Play Loud: Girls Rock Regina and the Ripple Effect”, and followed by performances from Girls Rock Regina and Sunset Embassy, and intimate karaoke live in Craft Service Café with Dayna McLeod.

Research on Girls Rock camps often focuses on how youth are empowered. For this documentary, the lens turns toward the adult artists, organizers, mentors, and campers of Girls Rock Regina, highlighting how their participation builds confidence, fosters friendships, and sparks joy. I’m Gonna Play Loud reveals some of the many challenges that women and non-binary musicians face and how their experiences with GRR have inspired them to make change within Regina’s local music scenes.

Girls Rock Regina (GRR) is dedicated to amplifying and empowering the voices of girls, women, trans, Two-Spirit and gender-expansive youth and adults through music creation, collaboration and performance.

Immediately following the screening of I’m Gonna Play Loud: Girls Rock Regina and the Ripple Effect, one of the bands from the film will perform live.

This performance work features my body as the venue.

Intimacy as a method of connecting with an audience is central to my performance practice. Uterine Concert Hall features my uterus as the scene of the performance and the instrument of its production. Equipped with an internal speaker, my vaginal canal acts as the stage for the audience of my uterus. External concertgoers are invited to eavesdrop via stethoscope, on the faint echoes of the recital through the very flesh of my body. Like showing up to a concert and listening from outside the venue, this piece purposefully excludes external listeners while engaging with feminist performance practices of intimacy.

The latest form that Uterine Concert Hall uses intimate karaoke, where the audience is asked to sing a karaoke song for my uterus. Here, the karaoke singer wears headphones in which they can hear the musical track that they’ve picked as well as their vocal track. The catch is that everyone else in the room only hears the singer’s voice. Audience members are called upon to demonstrate their vulnerability while I am literally splayed out on a table offering myself for aural examination.

Join us after Dayna’s performance for a drink and a bite to celebrate the pleasure of gathering and engaging once more. Craft Services Café will be open all evening during the event for guests to enjoy.

Content Notice: This the event may discuss themes around homophobia, sexism, and transphobia.

Free*
Pay What You Can

I am a middle-ageing queer video and performance artist. I am a Settler Canadian who has lived in Tiohtiá:ke/Montréal/Montreal for the past 20+ years.

My work uses humour, and capitalizes on exploiting the body’s social and material conditions using cabaret, duration, remix, video, and installation practices. My interests of artistic and theoretical research are in media representations of sexuality, queer identity, and how bodies marked female are perceived as public property. I am also interested in how these modes of representation intersect with middle-ageing, since this is where I’m at in my life course.

I have 25 single channel videos in distribution, which have screened worldwide hundreds of times accumulatively, and I have staged over 3-dozen independent performance art works and cabarets, locally, nationally, and internationally. My work has been presented at the Summerworks Theatre Festival in Toronto, the Tang Teaching Museum in Saratoga Springs, the Abrons Art Center in NYC, Les Rendez-vous du cinéma québécois in Montréal, the Impakt Festival in Utrecht Netherlands, the Mardi Gras Festival in Darlinghurst Australia, MIX Brasil Festival Of Sexual Diversity in São Paulo Brazil, the Modern Art Museum in Warsaw Poland, the City of Women International Festival of Contemporary Arts in Ljubljana Slovenija, and Le Centre d’art contemporain in Paris. I have received research and development, production, and travel funding from the Canada Council and the Conseil des arts et des lettres du Québec. I have won numerous awards, including Le Prix Powerhouse from La Centrale Galerie Powerhouse in 2014 that celebrates mid-career women artists who have significantly contributed to the cultural life of Montréal, as well as various Audience Choice Awards at film and video festivals like the Prix du Public in the Experimental category at Cineffable, Festival International du film Lesbian et Feminist de Paris in 2019. In 2015, I was commissioned to curate a touring video program for Groupe Intervention Vidéo (GIV), an artist-run, video distribution centre in Montréal to celebrate their 40th anniversary.

I earned a PhD from the Centre for the Interdisciplinary Studies in Society and Culture at Concordia University. My interdisciplinary Humanities dissertation combines studies in performance art, feminism, queer theory, age, and research-creation, and centres my art practice.

Charity Marsh is a researcher, artist, and educator who has published on Hip Hop, women in popular music, gender and technology, interactive media and performance, and community arts-based programming. She is co-editor of We Still Here: Hip Hop North of the 49th Parallel and Director of the award-winning documentary I’m Gonna Play Loud: Girls Rock Regina and the Ripple Effect.

Marsh has produced and facilitated multiple workshops on creative audio and digital technologies; she has curated the Flatland Scratch Seminar and Workshop Series; developed supports for remote communities with hip hop programming; engaged in numerous collaborative hip hop and interactive media projects with many community partners.

Marsh is Director of the Humanities Research Institute, Director of the IMP Labs, and Professor in Creative Technologies and Interdisciplinary Programs in the Faculty of Media, Art, & Performance at the University of Regina.

Girls Rock Regina (GRR) is a volunteer-based organization dedicated to the empowerment of female, trans, two-spirit, and non-binary youth and adults through collaborative music creation and performance.

At GRR, you’ll learn an instrument, form a band, write and record an original song, and perform at a live music venue. In addition to technical training, you’ll take part in a number of music and non-music workshops centered on creativity and confidence-building, such as songwriting, image & identity, self defense, zine-making and more. No musical experience required!

We value diversity and strive to be as inclusive as possible. Camps usually have a very low tuition, sliding scale and/or provide financial aid, and value female mentorship and leadership.