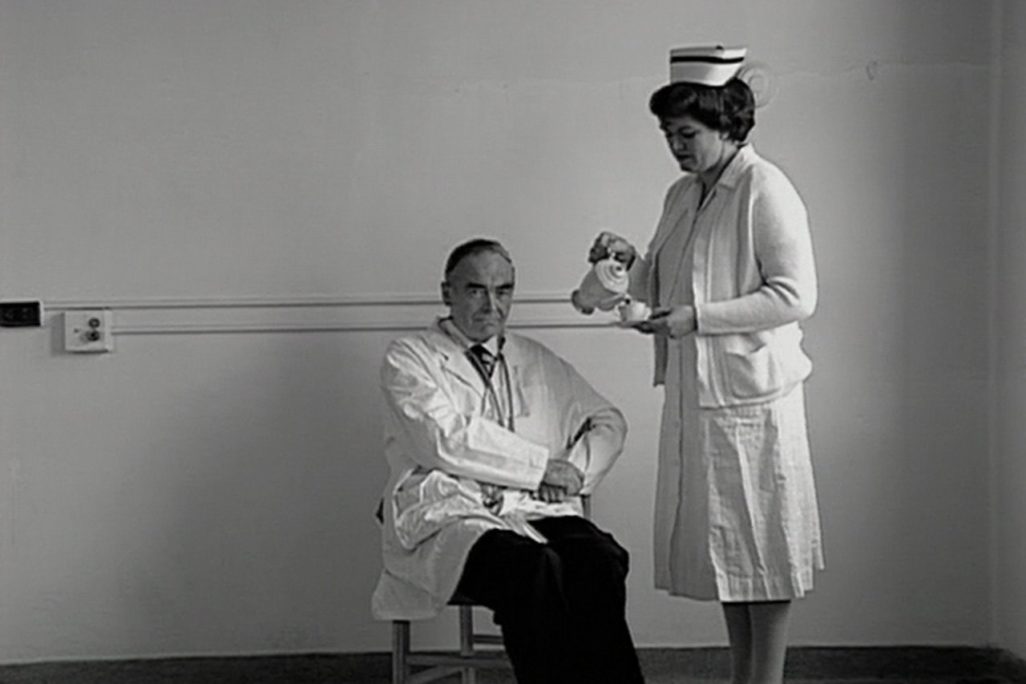 Join us for a virtual Thursday Night Live on Thursday, 11 June at 5:30 PM as we welcome guest artists Lisa Steele & Kim Tomczak for a livestream screening of their work, The Blood Records: written and annotated. After the screening, please stay with us online for an artist conversation, moderated by Dr. Lauren Fournier.

Curated in the context of COVID-19, this artist video takes a look back at a tuberculosis sanatorium in 1944, in the heart of the Canadian prairies (Fort San, Saskatchewan). The Blood Records: written and annotated explores the world of a young girl, ill with tuberculosis. Struggling to escape her diseased body, her spirit roams freely throughout the long days and nights, reminiscing about her family, fearful of the fate of a beloved older brother who is fighting in The War, missing her native language (French) which is now foreign to her tongue after two years in the English hospital and idolizing the handsome but distant war correspondent who has just been admitted. A haunting tale of disease and loss, the work infuses the irrevocably sad memories of the girl with a hope only possible through survival. Visually compelling, with austere tableau shot on location in real sanatoria lending a feeling of inevitability to each scene. A tale told within the skin of consciousness.

MacKenzie member? Join us for a pre-screening informal chat between the artists and CEO and Executive Director Anthony Kiendl at 5 PM. Check your inbox for details on how to join!

Lisa Steele and Kim Tomczak have worked exclusively in collaboration since 1983, producing videotapes, performances and photo/text works. In 2009, Steele + Tomczak were awarded an Honourary Doctorate by the University of British Columbia (Okanagan); in 2005, a Governor General’s Award for Lifetime Achievement in Visual & Media Arts; in 1994 they received both a Toronto Arts Award and the Bell Canada prize for excellence in Video Art.

They are co-founders of Vtape, an award-winning media arts centre established in 1983 in Toronto. Currently Steele is Artistic Director and Tomczak is Restoration and Collections Management Director. Both are Professors Emeritae teach at the University of Toronto in The John H. Daniels Faculty of Architecture, Landscape, and Design.

In September 2012, a major survey of their work The Long Time: the 21st century work of Steele + Tomczak curated by Paul Wong (with a 84 page catalogue), opened at On Main Gallery and VIVO, Vancouver; the exhibition traveled to A Space Gallery (2013), to the Art Gallery of Windsor (2016), and to the Dalhousie Art Gallery, Halifax (2017).

Major public art commissions include: Watertable (2009, and expanded in 2011) a light and sound installation under the Gardiner Expressway (a raised highway) that marks the original shoreline of Lake Ontario at the foot of historic Fort York; …bump in the night (Barrie) (2010) commissioned by McLaren Art Centre and installed in bus shelters; Falling Up (2006) a video work for the Winnipeg Art Gallery; Love Squared (2006) screened on the 2400 square foot video board at Yonge & Dundas Square in Toronto.

Legal Memory, their first feature-length work, has been shown in a number of film festivals since its release including: The Los Angeles Gay and Lesbian Festival, the Festival Internazionale Cinema Giovani (Turin, Italy), the Toronto Festival of Festivals and broadcast on TVOntario. In 1996, their work BLOOD RECORDS: written and annotated, received a world premiere at the Museum of Modern Art in New York and toured across Canada with a bi-lingual catalogue published by The Oakville Galleries.

Lauren Fournier is a writer, independent curator, and artist based between in Regina/Treaty 4 lands, Saskatchewan. Her work brings together artistic practice, exhibition-making, critical and creative writing, fermenting and food practices, socially-responsive work, and collaboration. As an artist, she primarily works in video, text and publications, sound, and small-gauge film (super8, 8mm). She currently teaches modern and contemporary art history, theory, and artists’ writing at the University of Toronto, where she is a postdoctoral fellow in visual studies. Her first book Autotheory as Feminist Practice in Art, Writing, and Criticism is forthcoming through The MIT Press in February 2021. www.laurenfournier.net