Studio Sundays Hybrid: Give and Take 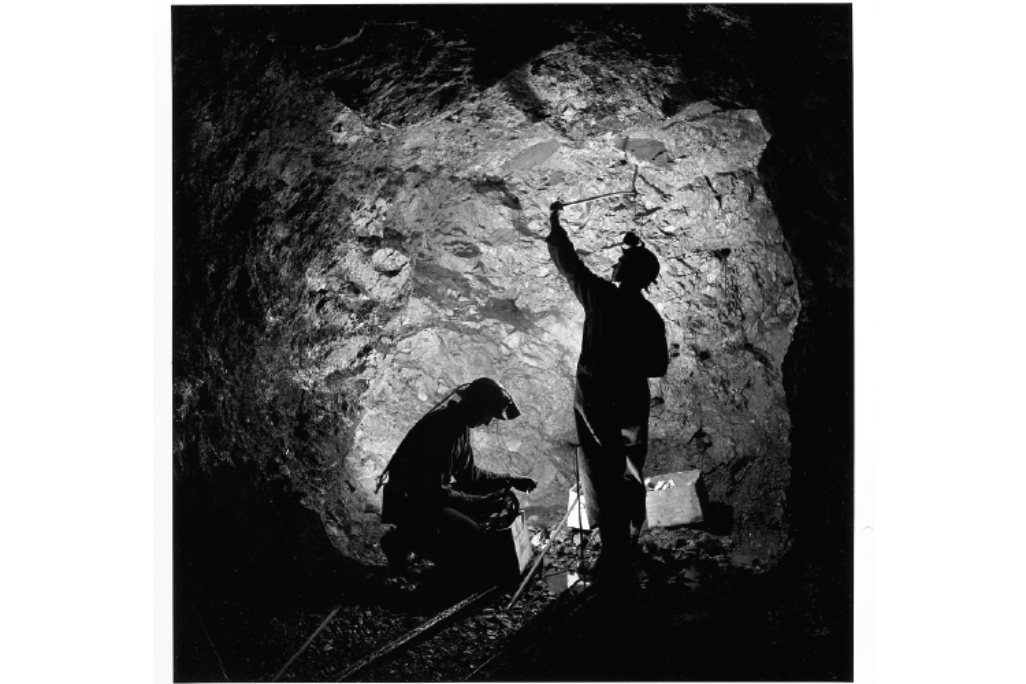 This photo was taken underground in part of the Beaverlodge Mine. The mine is located near the towns of Uranium City and Eldorado in the Lake Athabasca area. It used to be owned by a Canadian crown corporation (a business owned by the federal government). Uranium, a radioactive material, was mined here from 1952 to1982.

Early in his career, George Hunter was hired to take photos of many factories, mines, and places of industry. During the 1940’s, and 1950’s, governments and companies wanted photos that showed Canada as full of valuable resources and modern jobs. However, in the 1960’s and 1970’s, many people became more worried about the environment. George found that his work assignments shifted away from taking photos of factories and mines.

Many Indigenous groups have been concerned about the environment long before the sixties and seventies. The territory around this particular mine is the traditional home of Denesųłiné and the Métis. Today, it is part of Treaty 8. The Denesųłiné have been taking care of the land, animals, and waterbodies in this area for thousands of years. Along with the Métis community, they continue this land stewardship today, and are being consulted on the care of this former mine site.

This mine is no longer in use. Today, Beaverlodge Mine is going through a clean-up process to make sure the land and water are safe for people, animals, and plants. It includes covering the openings of mines, removing debris, and monitoring radiation levels. While the danger of radiation in this area is considered low, the Canadian Nuclear Safety Commission still recommends that people don’t eat fish from Beaverlodge Lake and some of the creeks around it. This land is not yet fully healed.

Many Canadians haven’t heard of George Hunter. Yet most Canadians have seen his art. His photos were in textbooks, atlases, on postage stamps, and even on money. For example, one of his photos of a fishing boat is on older five dollar bills.

George Hunter was born in Regina, Saskatchewan in 1921. He moved to Winnipeg with his family in 1934. His interest in photography began as a teenager, at a time where photography as an art form was a really new idea in Canada.

George Hunter lived an adventurous life. He crossed Canada over 100 times while taking photos. He would take on difficult and dangerous assignments. In this video from the Art Gallery of Ontario, you can hear him tell the story of getting thrown out of a plane while taking photos!

His art tells the story of a diverse, beautiful, modern, and hard-working Canada through his own unique lens. It is important to remember who is telling the story. There are often perspectives that aren’t included or that get left out of stories. Like any of us, George Hunter’s art comes from his personal viewpoint. While his artworks are important historical records, Canada and Turtle Island are too big and diverse for any one person to fully record on their own.

George Hunter took photographs into his senior years. Late in his life, he donated prints of many of his artworks to galleries across Canada. He wanted to ensure that his artworks wouldn’t all be hidden away in vaults and historical records. This is how the MacKenzie Art Gallery ended up with a series of his photos, which you can see in the second part of The Permanent Collection: What the Bat Knows.

To learn more about George Hunter, watch this slide show from the National Film Board. You can also check out the Canadian Heritage Photography Foundation, an organization that George started to care for and share the work of Canadian photographers.

In the Beaverlodge Mine, Uranium was taken from the ground. Today, people are trying to take care of and clean up this mining site. Think about your own relationship with the environment. Draw a picture of all the materials you take from the environment just by living your life each day. On the back of the page, create a picture of how you give back to the environment.