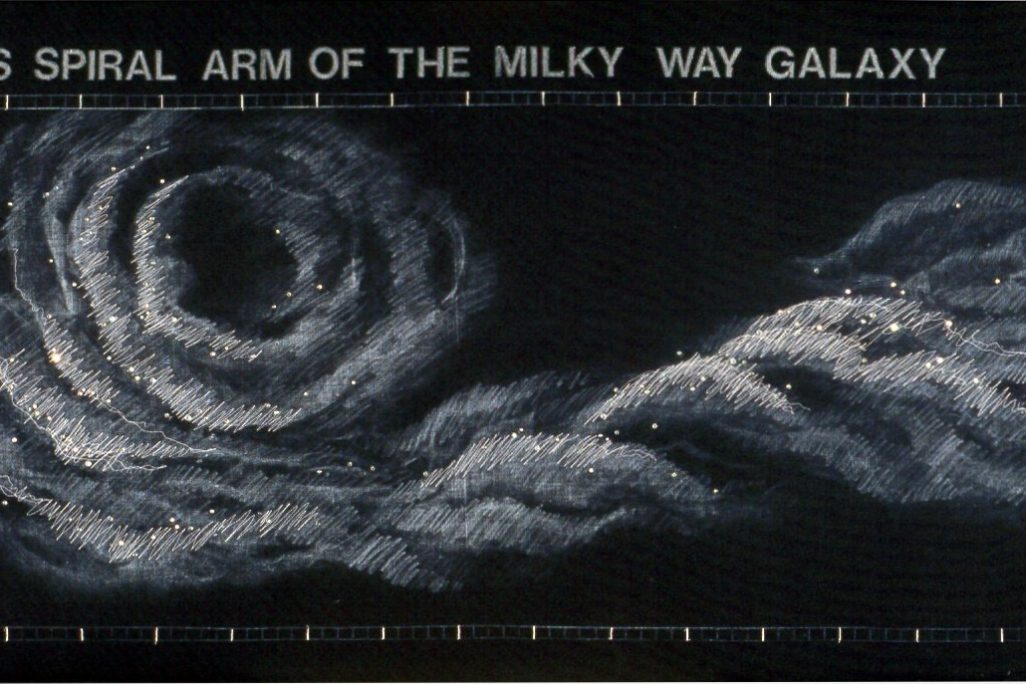 Cygnus Spiral Arm of the Milky Way Galaxy certainly qualifies as a big idea. This work was part of a  series of work for an exhibition titled, On into the Night. Cygnus is a constellation in the northern hemisphere, part of the Milky Way galaxy, which is sometimes visible in the Saskatchewan night sky. The arching appearance of the spiral arm looks somewhat like the neck of a swan, hence the name.

Radio mappings have revealed the structure of the Milky Way as disc-shaped, about 100,000 light years in diameter, with the sun located about 25,000 light years from the core and performing an orbit around the core about once every 250 million years. This kind of distance and time is mind-boggling and certainly makes an earth mile or minute seem insignificant. For Cole, a deeply spiritual and intuitive individual, her work demonstrates the power of the universe and the unknown.

Cygnus Spiral Arm of the Milky Way Galaxy and the other works in the series are a continuation of Cole’s earlier landscape paintings, and she uses many of the same materials: canvas, cotton thread, conte and rhinestones. She used a graph component in many of these works to suggest the size and scope of outer space and to explore phenomena represented there. The dark black canvas fabric adds an air of mystery to the work. The thread patterns create a sense of energy and the rhinestones reflect the light. They both work to activate the surface and draw our eyes through the image of the night sky.

From the ‘macrocosm to the microcosm’, Cole is intent on critically observing her world. “I am interested in developing a personal sense of connection both by networking on a social/political level and by trying to find the interrelatedness between myself and the Earth and Her cycles” she once wrote. “I want, by looking inward and at my immediate world, to understand/feel my position in the cosmos. One of the ways I try to make/articulate these ideas is through my work.” (Cole, 1990)

During her high school days in Regina, Saskatchewan, Martha Cole enrolled in art classes and quickly recognized her passion for art. Her high-school art teacher, Helmut Becker, encouraged her to develop her talents. He also provided extra art time after school and guidance in applying for universities and scholarships. Cole chose to attend the University of Washington in Seattle. She graduated in 1970 with a Bachelor of Fine Arts majoring in sculpture. She soon realized she needed more practical, employable skills and later earned a Bachelor of Education at the University of Toronto.

Living in Toronto, Cole had to work full-time to cover her basic living expenses. By moving back to Saskatchewan, she was able to work part-time as a librarian and pursue her career as an artist. Later, as her career developed, she was able to focus on her art practice – supplemented by occasional teaching and workshops

Cole bought an old church in the town of Disley, northwest of Regina, renovating it to be her home and studio. She established herself in the community and built her own utopia in the middle of the Canadian prairies. “I like to say that I came back for the meadow lark,” Cole says. (Linklater, 2005)

When the grain elevators in her town of Disley were demolished, Cole was greatly upset by the loss of these prairie icons. She decided to pay homage to their demise in a body of work known as Survivors. Each realistic fabric wall hanging represented a ‘surviving’ elevator and became a memorial to a rural way of life that is quickly disappearing.

In 2005, Cole toured the province with her quilted images to celebrate Saskatchewan’s Centennial as a province. She lectured, taught classes, and enjoyed meeting prairie people who share strong ties to agriculture and the land.

Cole has worked with fabric for more than 30 years. By incorporating traditional women’s crafts of sewing, embroidery and quilting into her artistic practice, she has effected change and a newfound appreciation for these techniques. Her work goes beyond the processes involved, however, as she states in the publication, Herstory 2000: “I see my work now as all having a spiritual focus, a focus that is life-affirming, woman-centered and woman celebrating.” (Cole, 2000)

THINGS TO THINK ABOUT

CREATE YOUR OWN UNIVERSE

Saskatchewan is known as the “Land of Living Skies”, something that Cole is reminded of every day. In many of her works she deals with the land and the sky, including the clear night sky. “You’re forced to develop your own way to work. It’s less limiting here, the big skies and big places make room for big ideas,” (Linklater, 2005). Make your own interpretation of the universe using household objects.