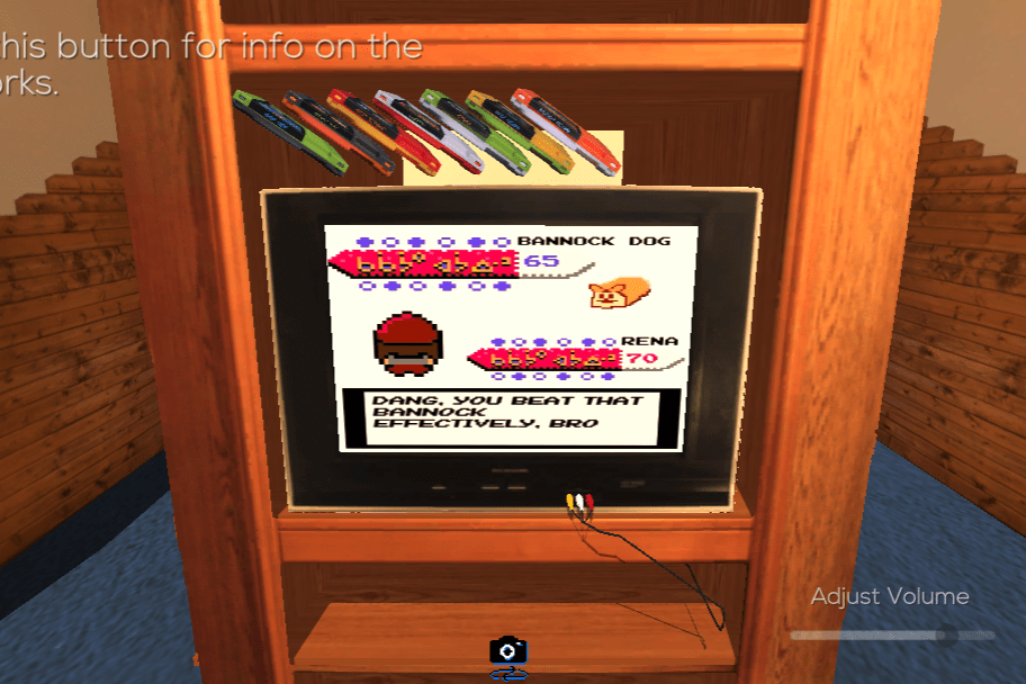 For this week’s online Studio Sunday, inspired by digital artist Dallas Flett-Wapash’s re-imagining of Nintendo games, examine one of your own favourite games, and create a re-designed “screen shot” that better fits your current viewpoint and experiences! Presented by Canada Life Co!

Dallas Flett-Wapash created the seven games in IndigiNES as part of the online exhibition !in:Site; for the Art Gallery of Southern Manitoba. Dallas’s games were originally meant to be experienced in a setting that would bring visitors back in time to the experience of gaming in the early 1990’s. However, in response to Covid-19, this exhibition was moved entirely online.

The seven games in IndiginNES reference different Nintendo Entertainment System (NES) games. For example, the game “Awas Dogs” looks like and is played very similarly to Pac Man, “Kevin’s 24/7” takes inspiration from Castlevania, and “Rena” makes cooking feel like a Pokémon battle. While these games were created with the modern game engine Unity, Dallas limited himself to the NES’s colour palette. He used Aseprite to design graphics with large, visible pixels. The games are played with an NES controller, rather than a mouse and keyboard.

Despite these references, the stories these games tell are entirely Dallas’s. They are rooted in his experience as an Indigenous person who grew up on reserves in Canada. For example, “Awas Dogs” relates to his personal experiences being chased by dogs while walking to the grocery store with his mother. It speaks to the costs of living on reserves, and to the $5 yearly treaty payment that hasn’t changed with inflation. It also speaks to Indigenous worldviews; notice the turtle-shaped playing field referencing Turtle Island (an Indigenous name for North America). Throughout the games and menu screens, Dallas uses Cree words and syllabics. He also uses the vernacular of the Swampy Cree reserve he grew up on (a vernacular is a language style specific to a place or group of people). Deadleh!

These works of art let people with similar lived experiences to Dallas feel represented in video games. They re-imagine a past with Indigenous artists included in mainstream video game design. At the same time, they allow people who have never lived on a reserve to learn about Dallas’s experiences. These games highlight both the unique positive experiences of reserve life, as well as the hardships that come from the social inequality many Indigenous communities face. These games could be described as retro-futurism, as they use an art style from the past combined with modern technology, and examine how early digital artworks (like NES games) felt modern or futuristic at the time of their creation. This style hints at how social inequality has also kept many Indigenous communities living in conditions that feel like they belong in the past. It also makes us think about what digital art will look like in the future if Indigenous artists are better represented.

Click here to watch the games from IndigiNES in action, and hear Dallas speak about his works: https://youtu.be/o3qk3GQ8ddQ

Dallas Flett-Wapash is digital artist who works with video games and other interactive technologies. He is Ininew (Cree) and Saulteaux (specifically from the Keeseekoose First Nation, Saskatchewan). Dallas currently lives in Fox Lake Cree Nation, in northern Manitoba. His practice is an ongoing digital reconstruction of his cultural identity. Dallas examines and shares his experiences, beliefs, culture, language, and lifestyle using video game aesthetics. His work also challenges the current practices of video game design, and uses game engines and design tools in unusual ways.

Dallas is also an educator who works to make digital mediums accessible to all artists. He has taught digital arts workshops for many arts and educational organizations, including the MacKenzie Art Gallery.

His recent accomplishments include being part of two co-exhibitions with Taylor McArthur: !in:Site; for the Art Gallery of Manitoba, and Azimuth Nitehi for the Video Pool Media Arts Centre. Dallas participated in the MacKenzie Art Gallery’s first Digital Artist in Residency program. He has done lots of work with the Unity engine, including researching augmented reality techniques through a Canada Council for the Arts grant, creating a four-part online series on learning Unity for Create2Learn, and assisting the National Film Board with Unity.

Inspired by Dallas Flett-Wapash’s re-imagining of Nintendo games, examine one of your own favourite games, and create a re-designed “screen shot” that better fits your current viewpoint and experiences.