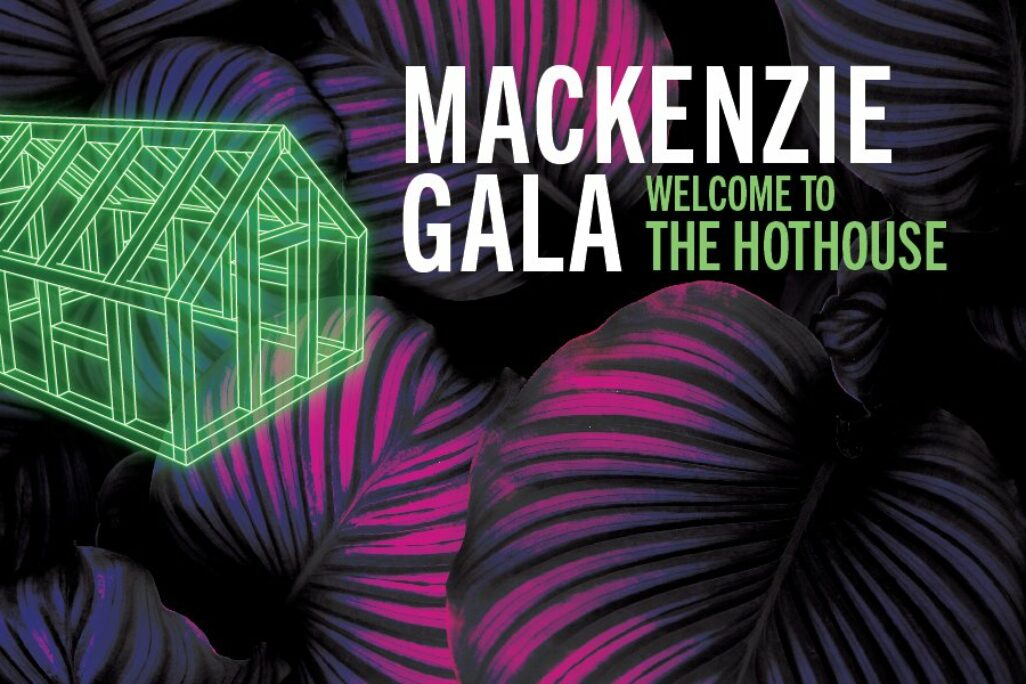 WELCOME TO THE HOTHOUSE!

Join the MacKenzie Art Gallery for our 2022 Gala, presented by ISC!

After a two-year hiatus, the MacKenzie Art Gallery is delighted to announce the long-awaited return of its annual MacKenzie Gala. This year’s Gala will take place in the T.C. Douglas Atrium, the Gallery’s very own “hothouse”, where guests will be greeted with a glass of champagne and culinary delights, as they explore a uniquely playful art experience and mix and mingle their way through an otherworldly botanical oasis.

By attending the Gala, you are directly supporting the Gallery’s acclaimed exhibitions and public programs.

Dress to impress yourself!

The highlight of the evening will be our Live Art Auction. Guests will get the chance to outbid one another for one-of-a-kind artworks by an incredible lineup of locally, nationally, and internationally exhibited artists including:

In addition to the thrill of the live auction, guests will have the opportunity to:

The Sculptor, 2021, Porcelain slip-cast bas relief, artist signature and edition number on back

TahItan Women wear this in their hair, 1999/2019, lithographic Lightbox

Kris Alvarez
Kris Alvarez is a theatre artist performing and creating in Regina, Saskatchewan. She continues to work in film (Donkeyhead, KarmaFilms / Agam Darshi), parks (2021 Other Side of the River, 2022 Wâhkôhtowin, Sum Theatre), TV (ZARQA, CBC Gem), onstage (Making Spirits Bright – Globe Theatre), and in creation (Acknowledging). You might have seen her Emceeing at the 2022 Regina Folk Festival, where she debuted Burnt Sienna Boulevard, a reimagined version of her variety show for younger audiences which she will continue into 2023.
Find her @krisalvarez

Be immersed in the work of Toronto-based artist Alex Mcleod, whose 3D software work expresses the interconnectivity of life’s cycles, through vivid colour and hyper-real texture.

Alex McLeod is an artist who creates work about interconnection, life’s cycles, and empathy through the computer as medium. Prints, animations, and sculptures are produced as gateways into alternative dimensions, oscillating between the real and the imagined.

McLeod holds a BFA from the Ontario College of Art and Design, and a MDM from the Yeates School of Graduate Studies at Ryerson University, Toronto. He has exhibited internationaly in festivals, museums, and embassies. His work is held in private and public collections including The Whitney Museum of American Art (NYC) and the Museum of Contemporary Art (Toronto). He’s been featured in The Creator’s Project, Canadian Art Magazine, Globe and Mail, and Kanye West’s blog.

Ross Bearman aka DJ Rosé has been an active member of the Saskatchewan music scene for over 15 years. Before starting to DJ in 2019, he played drums in countless groups from Jazz to Soul to Hip-Hop and continues to do so. His background in musical performance has influenced his open format DJ style and is sure to bring the best taste and atmosphere to any event he’s a part of.

As a Gala attendee, get first access to purchase a limited-edition print of artist Ruth Cuthand’s Surviving COVID-19, signed by the artist. All proceeds go directly to supporting the MacKenzie Art Gallery’s exhibitions and public programs. Only 100 prints are available!

Prints will be available for purchase the night of the Gala, or Gala attendees can buy now and pick up at the event. Gala ticket buyers will be sent an email with an exclusive access code, so be sure to keep an eye out!

Part of the MacKenzie Art Gallery’s Permanent Collection, Ruth Cuthand’s Surviving: COVID-19, translates the artist’s signature beadwork into a photographic edition intended to be shared with a broader community. It builds on her influential Trading Series (2009), in which she created seductive and sinister images of the viruses and bacteria brought by Europeans to the Americas, such as typhoid fever, chicken pox, whooping cough, measles, and, most devastating of all, smallpox. These hauntingly beautiful images expose the terrible exchange which saw glass beads traded for epidemics of disease, beauty for destruction, and in later times medical knowledge for cultural understanding. The Surviving series focuses on diseases that the artist has seen in her life-time, as she witnesses the continued survival despite the disproportionate effect this new virus has had on Indigenous communities both in Saskatchewan and elsewhere. The images also allude to a Cree understanding of the world; the word for bead in Cree is animate, pointing to Cuthand’s work—and the viruses they represent—as living beings.

Ruth Cuthand was born in Prince Albert, Saskatchewan in 1954, but grew up near the Blood Reserve in Alberta. A Plains Cree and Scottish/Irish artist, much of her work explores the frictions between cultures, the failures of representation, and the political uses of anger. Cuthand began her formal study of art in 1977 at the University of Regina, although her interest in art originated much earlier. Initially, Cuthand studied printmaking, but due to a chemical allergy she turned from the toxicity of printmaking methods to the practice of painting. She left the University of Regina to have her second child and returned to art school at the University of Saskatchewan, obtaining her Bachelor of Fine Arts in 1983. She continued her training in the University of Montana’s Master of Fine Arts program in 1985, while producing her monumental series of dress paintings – a major breakthrough in her practice.

After obtaining her Master of Fine Arts from the University of Saskatchewan, Cuthand expanded her practice to include drawing, photography, and beadwork. Cuthand has been the recipient of the Lieutenant Govenor’s Arts Award (2013), and the Governor General’s Award in Visual and Media Arts (2020).

Atrium tables are now sold out.

Includes complimentary welcome champagne upon arrival, canapes throughout the evening.

Note for Members: Please login with the email affiliated with your MacKenzie Membership in order to access the Member ticket pricing.

Includes complimentary welcome champagne upon arrival, canapes throughout the evening.

Note: This ticket is for non-members. If you are a MacKenzie Member, please select the Member Early Bird Individual Ticket option above.

If you have any questions about this event or are unable to attend but are curious about ways to further support the Gallery, please do not hesitate to reach out to our Member & Volunteer Coordinator: 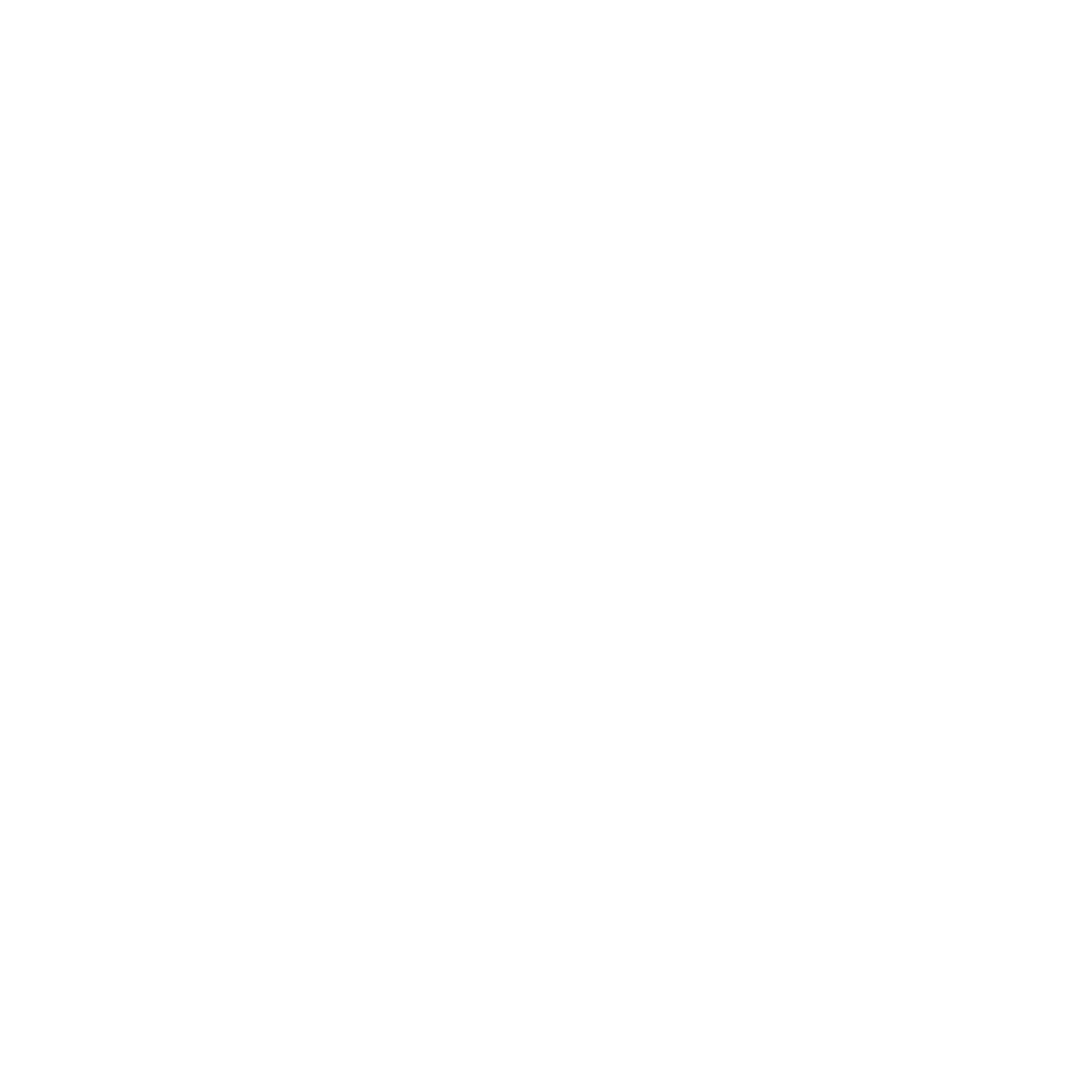 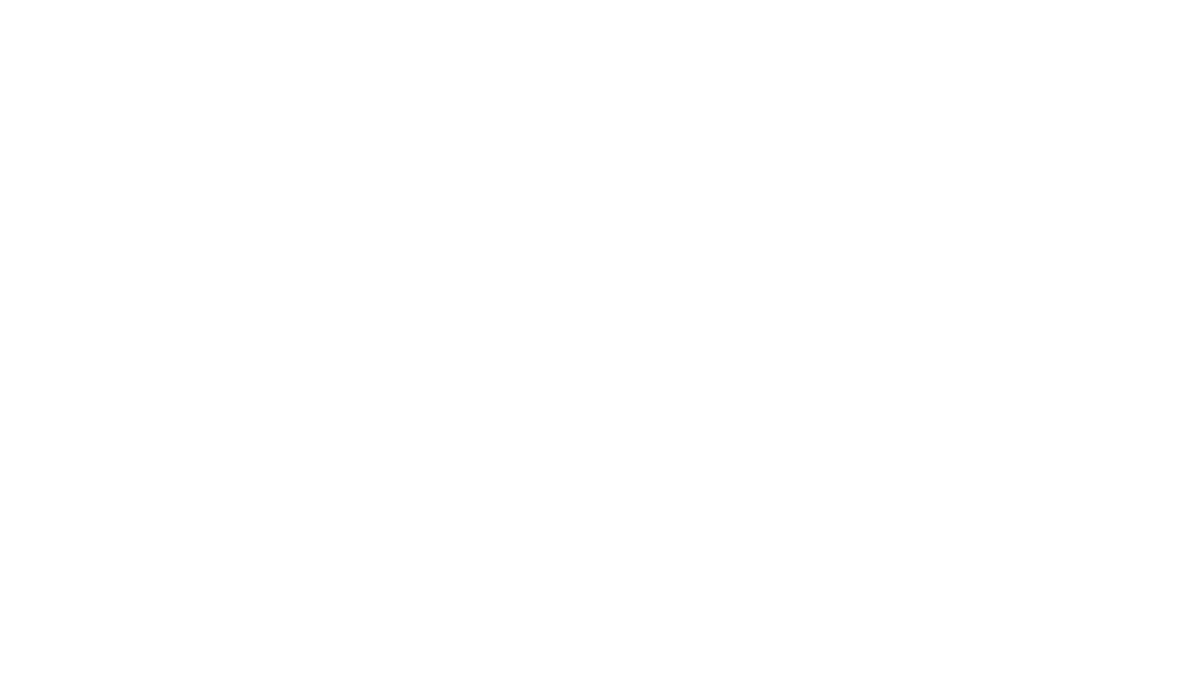 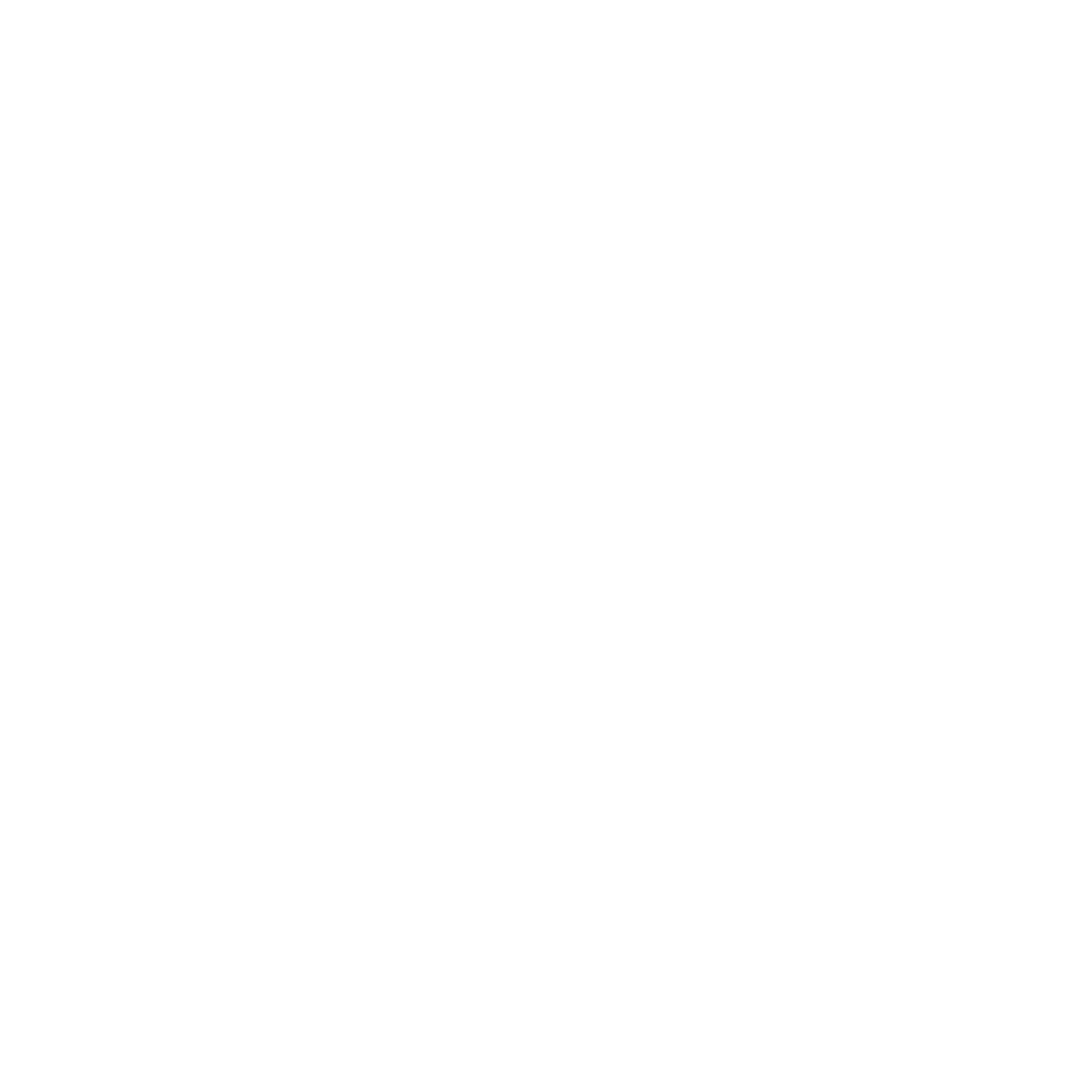 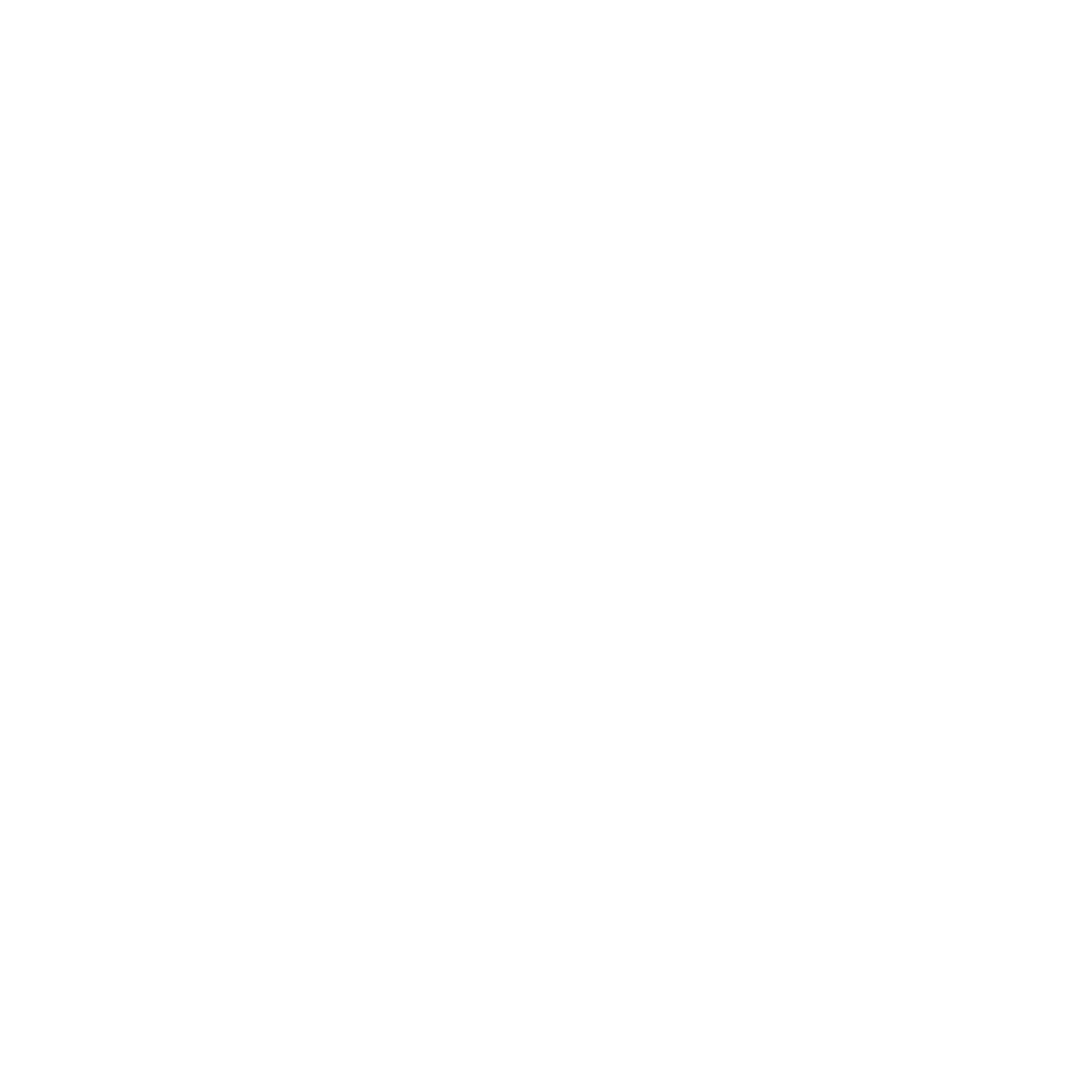 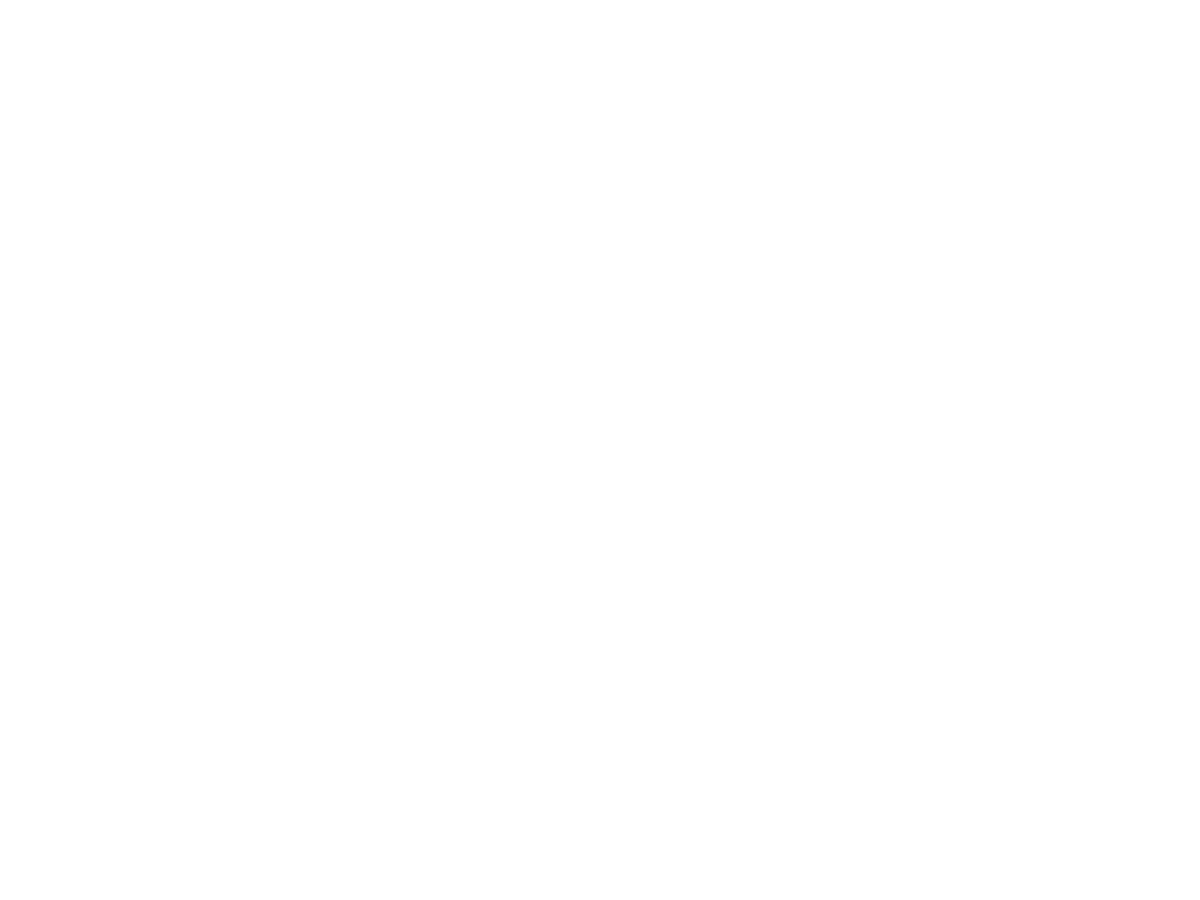 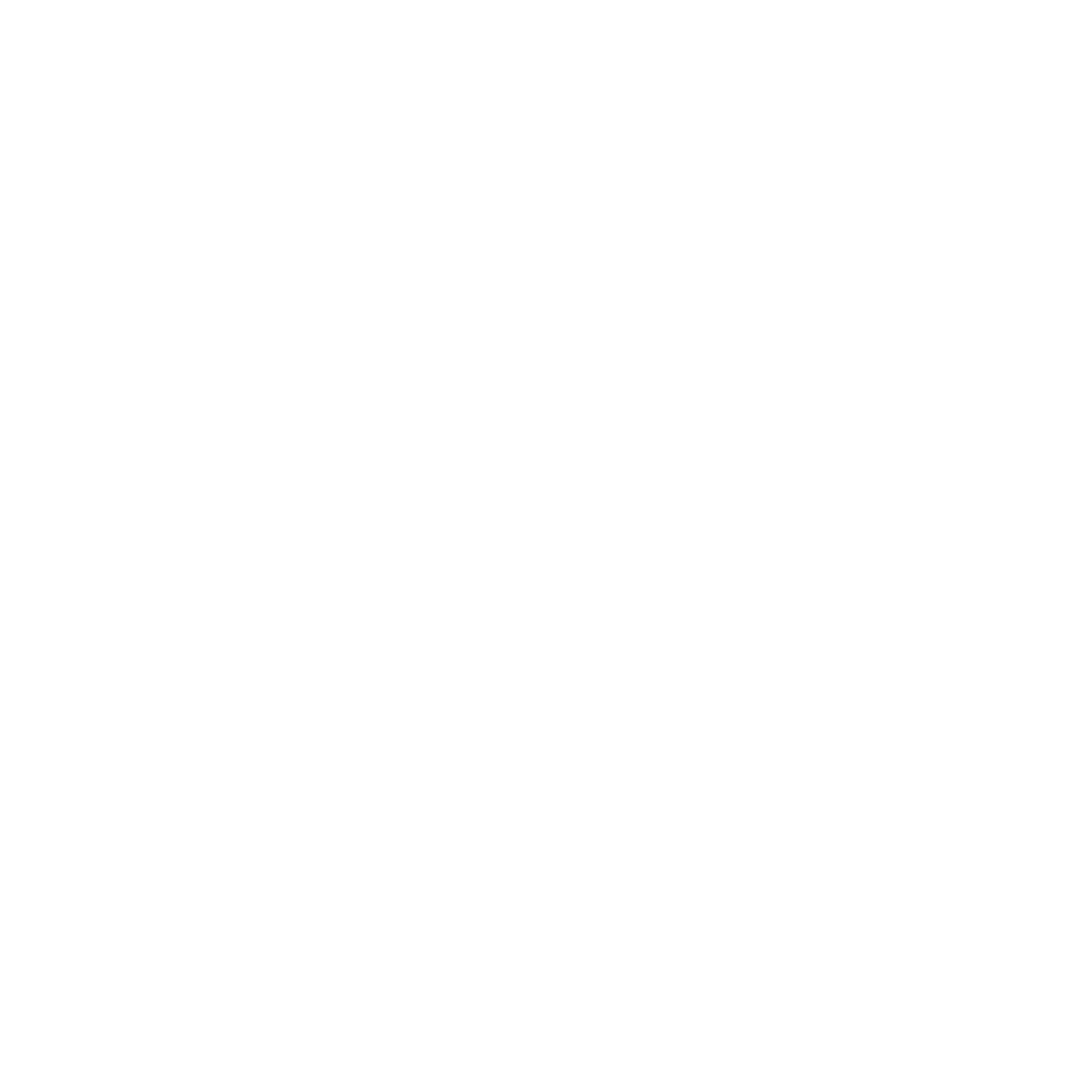 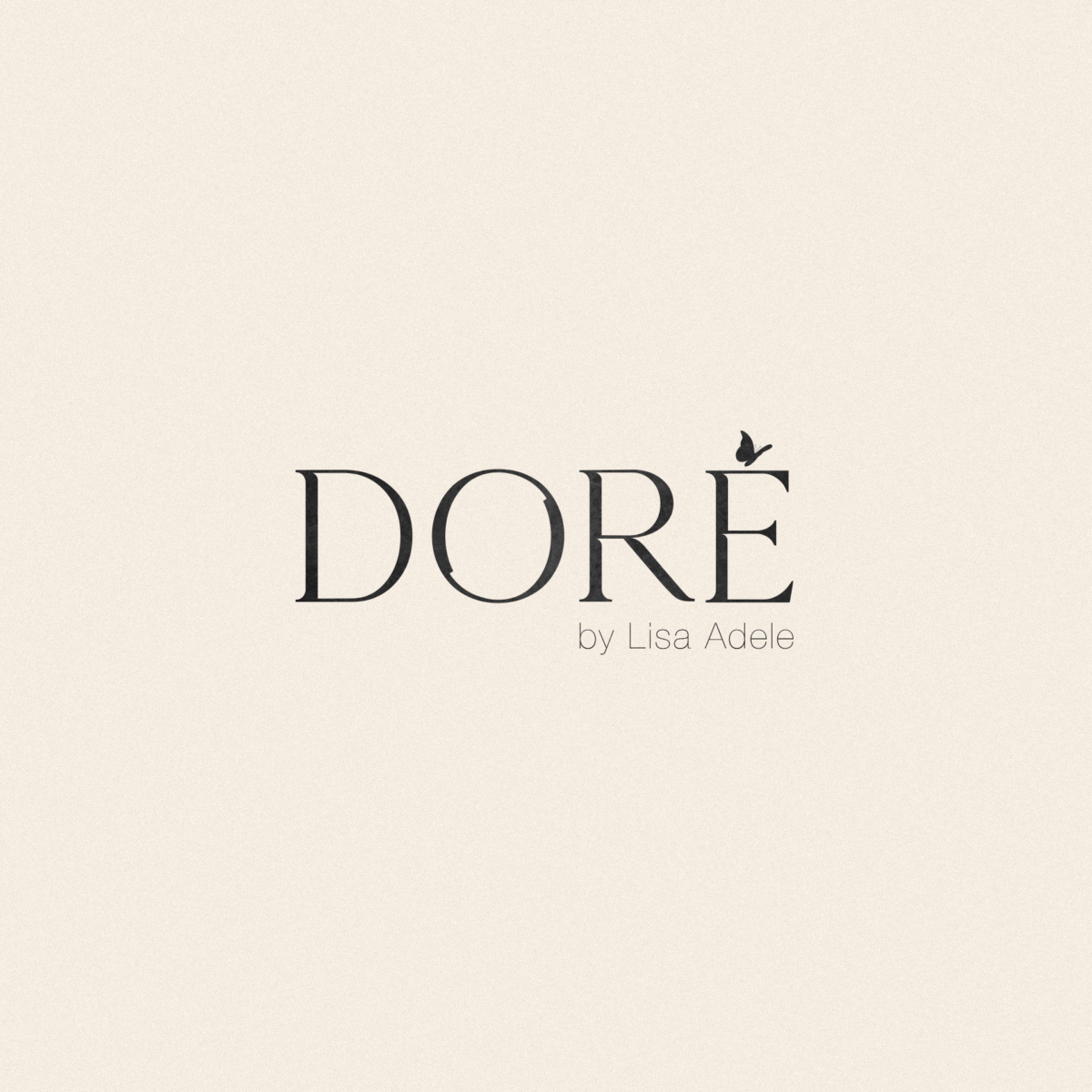 Special Donors of the event 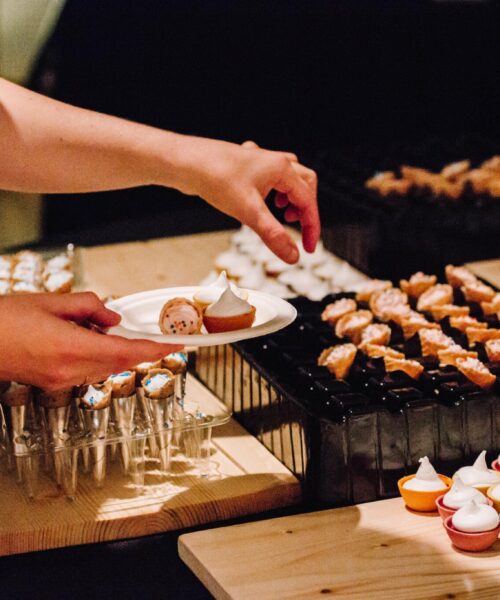 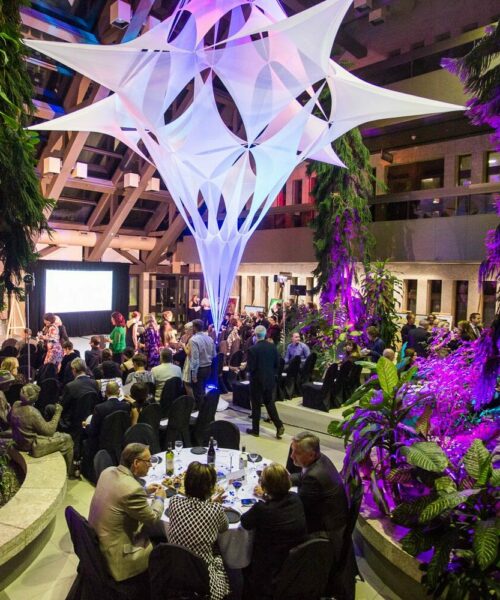 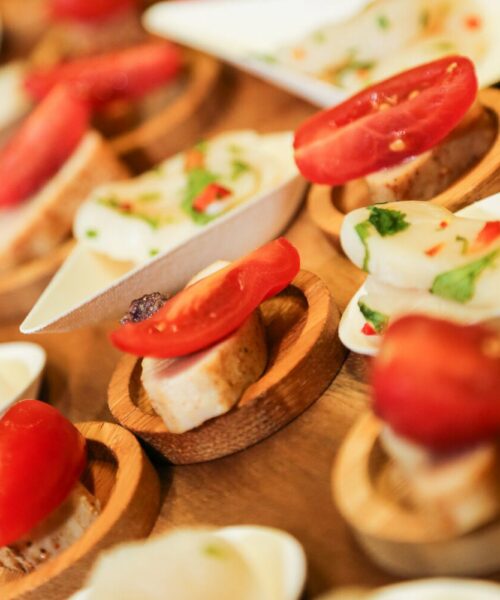 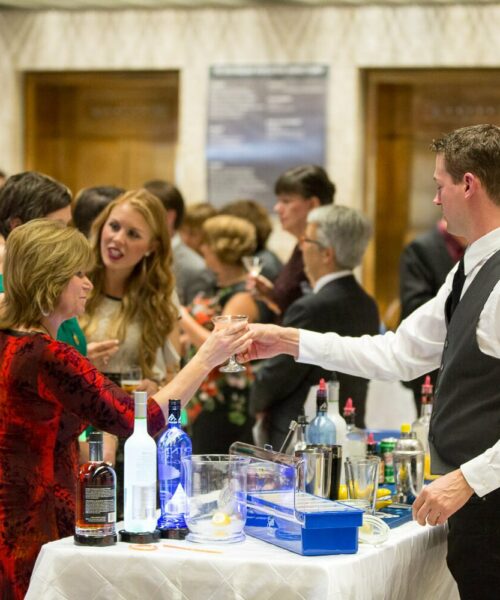 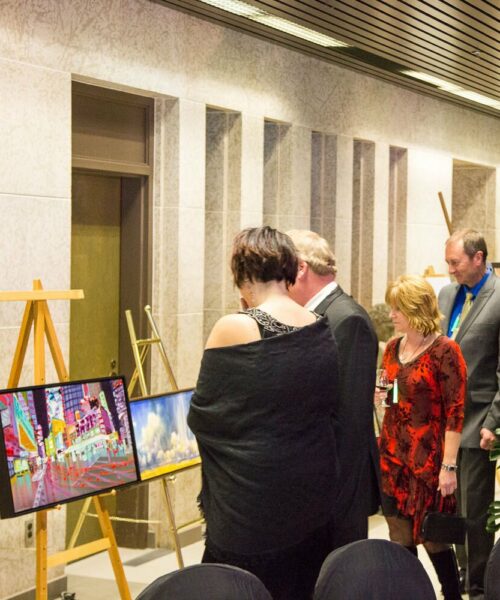 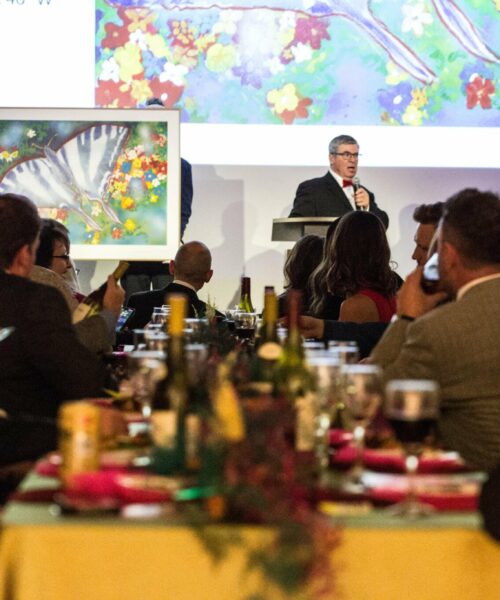 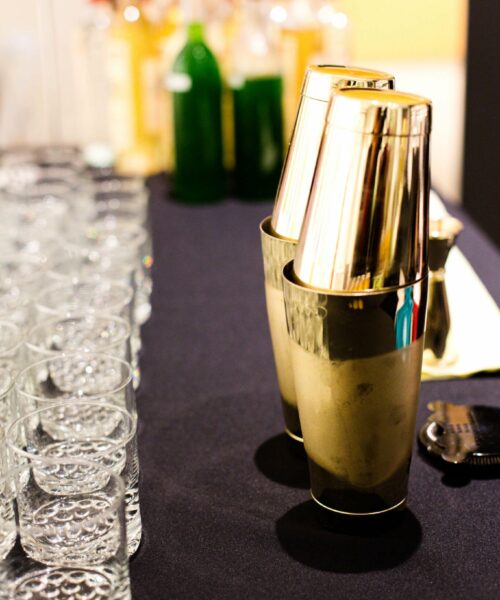 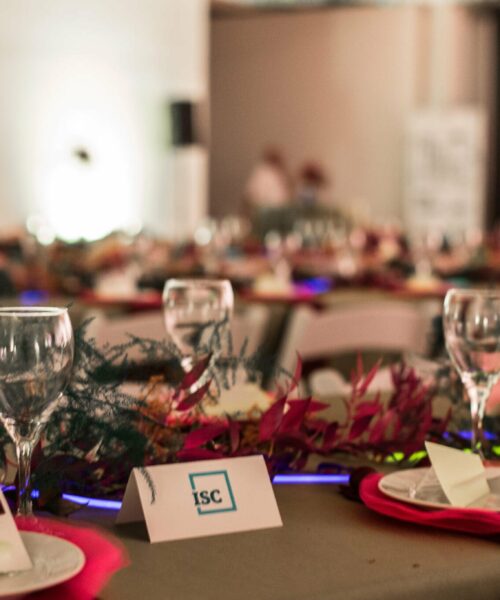