Beyond Compliance: A Conversation with Carmen Papalia and jes sachse 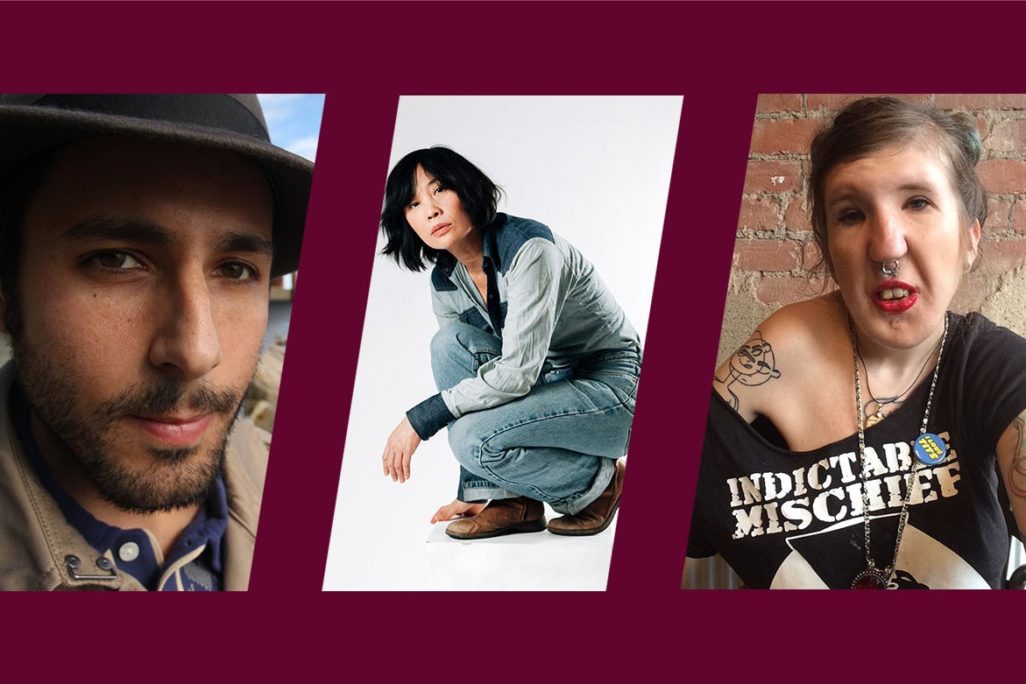 Image description: Side-by-side photographs of the three event presenters, Carmen Papalia, Sook-Yin Lee, and jes sachse. Carmen wears a quiet smile and gazes directly at the camera, with a sunny ocean coastline behind him. Sook-Yin is crouched down, almost on one knee, looking up at the camera against a white background. jes is gazing directly at the camera, with a loose black t-shirt falling over one shoulder, sitting in front of a brick wall. The three images are connected together with diagonal lines.

UPDATE: Postponed, we will add new date and time information when it is confirmed.

This conversation will be presented as part of the opening celebration for Provisional Structures: Carmen Papalia with Vo Vo and jes sachse on Saturday, June 12 at 2 PM CST (4 PM EST). This event will also be livestreamed in the Shumiatcher Theatre as part of our Rawlco Radio and the MacKenzie Art Gallery Free Admission Day.

Moderated by writer and Canadian broadcaster Sook-Yin Lee, artists Carmen Papalia and jes sachse will discuss the history of disability art from the perspective of two of Canada’s leading contemporary artists, addressing the persistent erasure of disability arts and the fact that it is constantly presented as ‘new’. This timely dialogue will not only mark the history of disability art as an existing construct, but it will also focus on what it means to make spaces accessible and how we can participate in experiences and relationships that are caring and relational.  Access offerings for this program include closed captioning, ASL interpretation, graphic interpretation, and a Discord community forum.

This program is presented in partnership with the Open Access Foundation for Arts and Culture and will be the first in the Open Access Foundation’s speaker series as part of their event series, titled Beyond Compliance. Beyond Compliance is an event series that aims to set a new cultural standard for accessibility by centring the practices of disabled, D/deaf, Hard of Hearing, Mad, neurodivergent, sick and chronically ill artists, curators, cultural workers and their co-conspirators.

About the Open Access Foundation’s Event Series: Beyond Compliance:

This series emerges in a dual reality, as Disability Arts garners increased attention in the mainstream, while the lives of disabled people are under increased threat by the practice of Covid-19 care rationing and the passing of Bill C-7, the Medical Assistance in Dying Act (visit https://dignitydenied.ca/statements/ for more information). As institutions proclaim they are committed to equity, diversity and inclusion with little substantive change to the intersecting oppressions that shape the national and international arts ecologies, this series will feature practitioners dedicated to Disability Culture, artistry and world building as a counterpoint to the violence of ableism. In each instalment, presenters who hold embodied forms of knowledge, and who have been at the receiving-end of care that has failed them, will pose visions for accessibility that move beyond compliance-level commitments, towards justice.

jes sachse– Presently living in Toronto/Tkaronto located on Treaty 13 territory, jes sachse is an artist, writer and choreographer who addresses the negotiations of bodies moving in public/private space and the work of their care.

Often found marrying poetry with large scale sculptural forms, their work has been presented and supported by 7a*11d Performance Art Festival, Dancemakers, the Centre de Création et Recherche O Vertigo (Montréal), Musagetes (Guelph), Harbourfront Centre, among other centres. Their work has appeared in and been profiled by NOW Magazine, The Peak, Canadian Art, C Magazine, CV2 -The Canadian Journal of Poetry and Critical Writing, Mobilizing Metaphor: Art, Culture and Disability Activism in Canada, and the 40th Anniversary Edition of Our Bodies, Ourselves. Most recently, they are the 2020 recipient of the Toronto Arts Foundation Emerging Artist Award.

Carmen Papalia uses organizing strategies and improvisation to address his access to public space, the art institution and visual culture. His work, which takes forms ranging from collaborative performance to public intervention, is a response to the barriers and biases of the medical model of disability. As a convener, he establishes welcoming spaces where those from historically marginalized groups realize their desires for participation through processes rooted in activism, performance and institutional critique. Papalia’s work has been featured at: The Solomon R. Guggenheim museum, the Tate Liverpool, the Banff Centre for Arts and Creativity and Gallery Gachet, among others.

Sook- Yin Lee is an award-winning Canadian multimedia artist, filmmaker, musician, actor, and broadcaster (CBC, BBC, MuchMusic). She starred in John Cameron Mitchell’s groundbreaking LGBTQ movie Shortbus which premiered at the Cannes Film Festival. Year of the Carnivore, Leeʼs feature film debut as writer-director starring Cristin Milioti, premiered at TIFF. Her work has been presented by Ottawa Art Gallery, Art Gallery of Ontario, Toronto Dance Theatre, and Festival of New Dance. In 2019 she wrote and starred in Unsafe at Canadian Stage that looked at questions of censorship and artistic freedom. Sook-Yin won the 2014 Canadian Screen Award for Best Performance by a Lead Dramatic Actress for her role as “Olivia Chow” in Jack. She is a film composer whose bands include JOOJ co-led with Adam Litovitz and Lee & Gamble Unlimited. Her movie, Octavio is Dead! a supernatural ghost story starring Sarah Gadon and Rosanna Arquette won Best Director and Best Picture awards at the Downtown Los Angeles Film Festival 2018. Her feature lockdown movie Death and Sickness made with Dylan Gamble streams on CBC Gem in Canada.