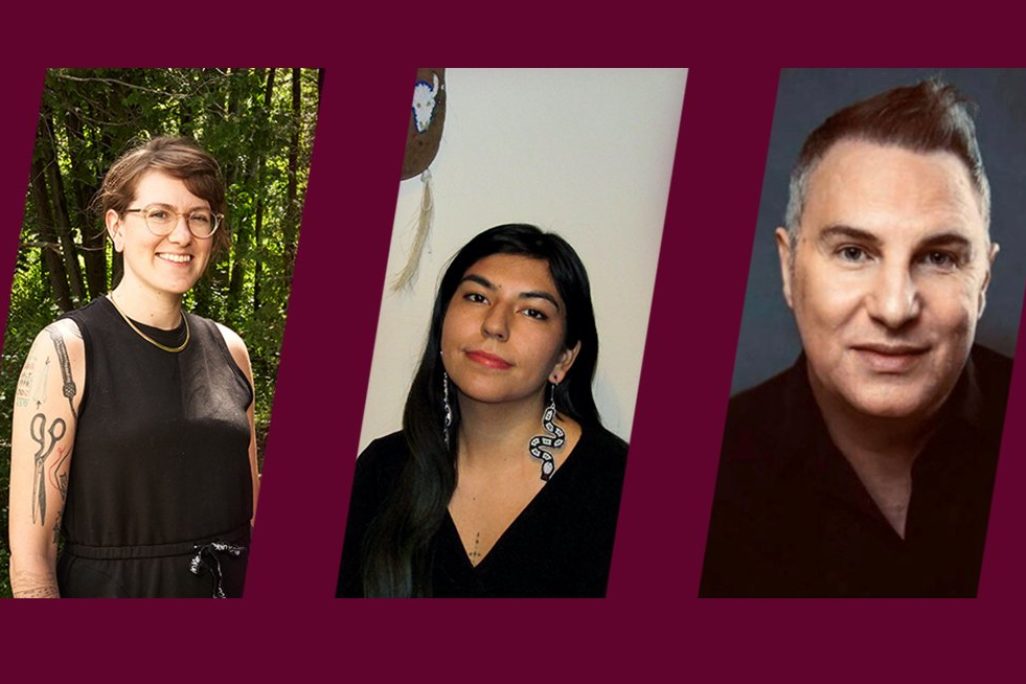 As part of the Beading Together: Radical Stitch Symposium, join the MacKenzie art Gallery, hosted in partnership with Shushkitew Collective, for a virtually streamed Artist Conversation: Beading Kinship with Audie Murray, Gregory Scofield, and Katherine Boyer!
Moderated by Michelle McGeough, this panel will explore the many ways beading as a practice strengthens and expresses our relationship to the natural world, our family, and our communities. It has been said that beading was a way of expressing our identity as well as a way of covering our loved ones with medicines and prayers. This panel examines how these artists see their practice as a way of not only producing art but as an expression of kinship.

Katherine Boyer (Métis/Settler) is a multidisciplinary artist, whose work is focused on methods bound to textile arts and the handmade – primarily woodworking and beadwork. Boyer’s art and research encompasses personal family narratives, entwined with Métis history, material culture, architectural spaces (human made and natural). Her work often explores boundaries between two opposing things as an effort to better understand both sides of a perceived dichotomous identity. This manifests in long, slow, and considerate laborious processes that attempt to unravel and better understand history, environmental influences, and personal memories. She holds a position as an Assistant Professor at the University of Manitoba, School of Art.

Audie Murray is a relative, dreamer, skin-stitcher and Michif visual artist based in Oskana kâ-asastêki (Regina, Saskatchewan; Treaty 4 territory). Her practice is informed by the process of making and visiting to explore themes of contemporary culture, embodied experiences and lived dualities. These modes of working assist with the recentering of our collective connection to the body, ancestral knowledge systems, space and time. She has exhibited widely, including at the Independent Art Fair, NYC; The Vancouver Art Gallery; Centre for Contemporary Arts, Glasgow; and the Anchorage Museum. Murray is represented by Fazakas Gallery on Sḵwx̱wú7mesh, Səl ̓ ílwətaʔ, and xʷməθkʷəy̓ əm territory (Vancouver, B.C.).

Is Métis of Cree, Scottish and European–Immigrant descent whose ancestry can be traced to the Métis community of Kinosota, Manitoba. He has taught Creative Writing and First Nations and Métis Literature at Laurentian University, Brandon University, Emily Carr University of Art + Design, and the Alberta University of the Arts. He currently holds the position of Associate professor in the Department of Writing at the University of Victoria. Scofield won the Dorothy Livesay Poetry Prize in 1994 for his debut collection, The Gathering: Stones for the Medicine Wheel, and has since published seven further volumes of poetry including, Witness, I am. He has served as writer-in residence at the University of Manitoba, the University of Winnipeg and Memorial University of Newfoundland. He is the recipient of the Queen’s Diamond Jubilee Metal (2012), and most recently the Writers’ Trust of Canada Latner Poetry Prize (2016) that is awarded to a mid-career poet in recognition of a remarkable body of work. Further to writing and teaching, Scofield is also a skilled bead-worker, and he creates in the medium of traditional Métis arts. He continues to assemble a collection of mid to late 19th century Cree-Métis artifacts, which are used as learning and teaching pieces. Scofield’s first memoir Thunder Through My Veins (Doubleday Canada/Anchor Books) was re-published Fall 2019.